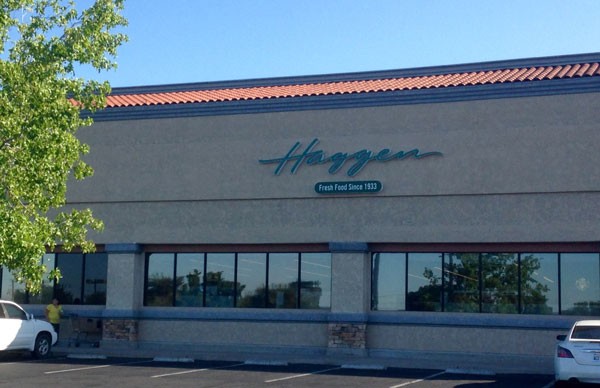 The Haggen’s grocery store on Creston Road in Paso Robles.

– Haggen CEO Bill Shaner has released the following updated statement regarding the recent layoffs in their chain of grocery stores:

“Our journey to establish and grow the Haggen brand in new markets has been challenging. As a result, we recently made the difficult decision to lay off members of our team. These decisions were especially painful – we don’t take them lightly – but they were necessary for our business. Employees were laid off based on job classification and seniority, in compliance with collective bargaining agreements. As part of the reduction, we eliminated the Clerks Helper job classification in our stores, which unfortunately included some associates with developmental disabilities. We feel for all our former associates, in particular those with disabilities. To clarify misinformation, all laid off associates may seek employment anywhere they choose. We have already and will continue to help these associates find other jobs, through individual support and by partnering with concerned leaders and organizations in the community.

“We know this process has deeply impacted our former and current team members, as well as our neighborhoods. Haggen takes pride in our 82-year history of delivering quality products, serving guests, and developing meaningful relationships in the communities we serve. We plan to continue that same tradition in the Pacific Southwest. We’re committed to succeeding and, as our business grows, we hope to bring back as many of our associates as we can.

“Having to implement layoffs has been extremely difficult, and I am especially disheartened by the fact that our associates with developmental disabilities were impacted by these changes. We are helping employees find other jobs and have reached out to organizations that help to support these individuals in hopes of learning from this experience and finding ways that we can help.

“This is deeply personal to me, and our entire team at Haggen. We are working tirelessly to strengthen our business. Our goal is that these cuts are temporary and that we will be in a position to re-hire all our associates over time.”

– Haggen, a Washington-based chain of grocery stores that recently expanded into California – including two locations in the North County – has let go of dozens of local workers. While the company confirmed layoffs, it did not share details.

“They started by cutting our hours,” said Christina Van Pelt, a former courtesy clerk at the Haggen store in Paso Robles. “Then they just took us completely off the schedule…Only the four original baggers that were first hired got to stay. They let go of 17 of us.”

Van Pelt, a single parent of a special needs five-year-old, said that finding a replacement job will be a challenge, as, because of details of an agreement with Albertson’s and Vons, which sold their locations to Haggen, she is not able to look for work at those grocery stores for a year. According to Van Pelt, the stores are looking into seeing if the time frame can be reduced. “My manager cried when he let me go. I felt bad for him having to do that. I know that the orders came down from corporate and they had to carry them out,” said Van Kelp. “We have no idea what we are going to do.”

Christina Righter is the mother of another laid off courtesy clerk. Her son, Myles O’Keefe, was a worker at the Atascadero location. “His managers loved him,” said Righter. O’Keefe was a high functioning special needs man, who will now also face challenges securing work. “The customers loved him,” she said. “He was doing so well, and he was so happy…I would hate to see him have to go back to flipping burgers or making sandwiches,” she said through tears. “He was excelling. He was growing.”

According to Righter, over 100 regional workers were laid off. Van Pelt said that 17 clerks were laid off from the Paso Robles store; close to 20 percent of the staff, she estimates.

Haggen declined to confirm the exact number of workers that were laid off in Central Coast Stores. “Haggen is focused on working with store teams and leadership through this transition with employees,” stated Kris Ellenberg, a public relations representative for Haggen.

Bill Shaner, CEO, Haggen, Pacific Southwest, issued the following statement:  “As we introduce Haggen throughout Southern California, Arizona and Nevada, our challenge is to establish and grow the brand in competitive new markets, while working to bring the complete Haggen experience to our stores. To ensure we’re operating as efficiently as possible, we have made the difficult decision to temporarily cut back on staffing at our stores, with specific reductions varying by store. We value the contributions these employees have made and are committed to treating all employees with the utmost respect and dignity through this transition. We will continue to monitor performance with the goal of restoring hours as we build customer affinity for Haggen and establish ourselves in the competitive grocery space.”