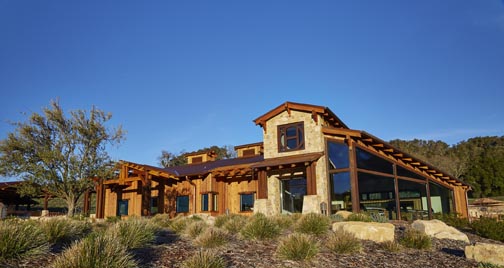 –The Central Coast Wine Competition (CCWC) has announced that Halter Ranch is the 2019 Winery of the Year. This is the second Winery of the Year award for the Paso Robles winery, which took home the same honor in 2017.

The award was presented Friday evening, July 19, at the Wine Industry Awards & Gold Medal Tasting in Mission Square during the California Mid-State Fair.

“Since Hansjörg Wyss purchased the property in 2000, the team has worked diligently to be leaders in sustainability, and stay at the forefront of modern vineyard and winemaking practices,” said Kevin Sass, Halter Ranch’s winemaker. “This focus has enabled us to create solid and consistent wines and win this incredible honor twice in the last three years, it means even more to be recognized by our peers in our own backyard.”

The Best Red Wine was awarded to Halter Ranch’s 2016 Ancestor. The Bordeaux blend also won a double gold medal, and was awarded Best of Class for Bordeaux Blends. The Paso Robles winery also won Best Pink Wine for their 2018 Rosé. In addition, the Rhône-style rosé was awarded a Double Gold Medal and won Best of Class for Grenache Rosé. Halter Ranch’s inaugural release of the 2015 Libelle Sparkling won a double gold medal and a bronze in the overall Best of Show category.

“What makes producing wine at Halter Ranch so interesting is that our climate and soils lend themselves to so many grape varieties,” Sass said. “From picpoul blanc to petit verdot all the varieties that we grow create wines that have great flavor and texture. It allows our winemaking team to be creative in both the winemaking process and blending. We are honored to play a part in showcasing the diverse and exceptional wines produced across the Paso Robles AVA.”

The two-day competition took place in June at Estrella Hall at the California Mid-State Fair, where a panel of 18 judges blind-tasted through each wine. Only after the awards were finalized were the producers revealed. This year’s competition included 165 wineries and a record-breaking 803 wines entered. The competition features 68 classes based on grape varieties and vintages, where the “Best of” wines are selected for their varietal typicity, quality and character. The complete list of winners is available here.

“I’m pleased to say that this, the 17th Annual CCWC has been the best yet, in both our judging panel and the quality of the submissions.” said Michael Bradley, CEO of the California Mid-State Fair. “As we in the Central Coast know, some of the world’s best wines are being grown and produced right here in our backyard. Our goal is to celebrate and shine a global spotlight on these agricultural artisans. Hats off to Halter Ranch!”