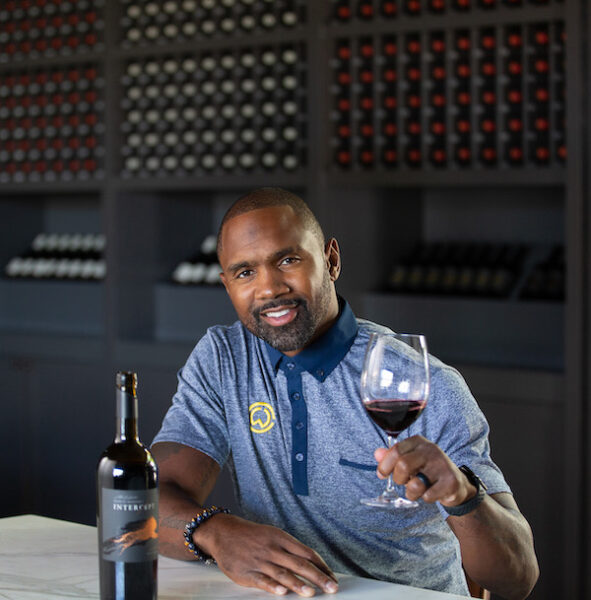 –The only defensive player ever to win a Heisman Trophy has just reached another landmark. Super Bowl champion and NFL great Charles Woodson’s Intercept wine brand recently announced that it has achieved full national distribution through its partnership with O’Neill Vintners & Distillers.

Launched in 2019, Charles Woodson’s Intercept was previously available in only fifteen select markets, including the Midwest, California, and Florida. Now, Woodson is the first Black NFL player and wine brand partner to gain direct-to-retail distribution nationally. Intercept is also available in 28 states for direct-to-consumer shipping, with more to follow.

Intercept wines are available at a suggested retail price of $20. The starting line-up includes a Cabernet Sauvignon and Red Blend from Paso Robles, with a Pinot Noir and Chardonnay from Monterey County.

Intercept is a partnership between O’Neill Vintners & Distillers – a leading California producer of premium wine brands – and Charles Woodson, an NFL veteran, sports anchor, and well-known wine aficionado. Since its limited launch in August 2019, Intercept has shipped over 18,000 cases.

“In light of what is happening in the US currently and the worldwide uncertainty, I am in awe of the reception that Intercept has achieved in less than one short year,” said Woodson. “I have always thought that wine was universal – that it brings people together – and I can’t be more grateful for the response we have seen from distributors, retailers and, most importantly, wine fans.”

“Charles is an incredible businessman, athlete, and wine professional,” said Christine Moll, VP of Marketing for O’Neill Vintners & Distillers. “It is no surprise that he creates new fans in everyone who meets him – from Sommeliers to sports fanatics to wine enthusiasts. His palate and wine knowledge are astounding, and the incredible quality of the Intercept line is a direct testament to that. I look forward to seeing the brands’ success nationwide through Charles’ undying passion and inspiring leadership,”

Woodson is an 18-year NFL veteran, former NFL Defensive MVP and Heisman Trophy winner. He is a Super Bowl champion and nine-time Pro Bowl defensive back. The veteran player played his final season in 2015. He played college football for Michigan, where he led the Wolverines to a national championship in 1997. Woodson, a “two-way player” who played both offense and defense, won the Heisman Trophy in the same year. To date, he is the only primarily defensive player to win the Heisman, and he is the most recent player to win the Heisman who was not either a running back or quarterback. Woodson went on to accomplish a storied career professionally with one of the most decorated professional football resumes of all time, considered by many of his peers to be one of the greatest defensive players to have ever played.

O’Neill Vintners & Distillers was founded in 2004 by entrepreneur and industry veteran, Jeff O’Neill. The family-owned and operated winery has grown to become one of the largest varietal wine and brandy producers in California with a reputation for producing high-quality wines from the North Coast, Central Coast, and Central Valley. Through its extensive vineyards and modern production facilities, O’Neill’s growing portfolio of national and exclusive brands includes the fast-growing Line 39 Wines. Other brands in the company’s national brands portfolio include Robert Hall, Harken, Exitus, and Day Owl. For more information, please visit www.ONeillWine.com.