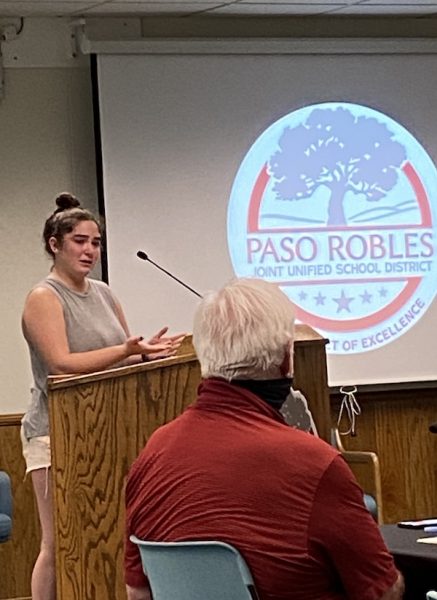 –At an emergency meeting held Tuesday night at the Paso Robles Joint Unified School District office, the school board voted unanimously to direct staff to plan and execute alternative graduation ceremonies, different from the ones which were planned to begin at 10 a.m. Wednesday morning at War Memorial Stadium.

“In lieu of our planned graduation, we have been given authorization to proceed with ‘drive-In’ ceremonies at the Mid-State Fairgrounds,” wrote Deputy Superintendent Jennifer Gaviola in a press release Wednesday morning.

The new plan, developed by Gaviola and Paso Robles High School Principal Anthony Overton calls for a graduation ceremony at 6 p.m. for each group that was scheduled to graduate that day. There is one exception: The Paso Robles group scheduled to have commencement exercises at 8 p.m. this Wednesday evening will join the other high school graduates at 6 p.m. Thursday. The graduation ceremonies will be a “Drive-In Ceremony” held at the Paso Robles Event Center (Mid-State Fairgrounds) on Riverside Avenue in Paso Robles. 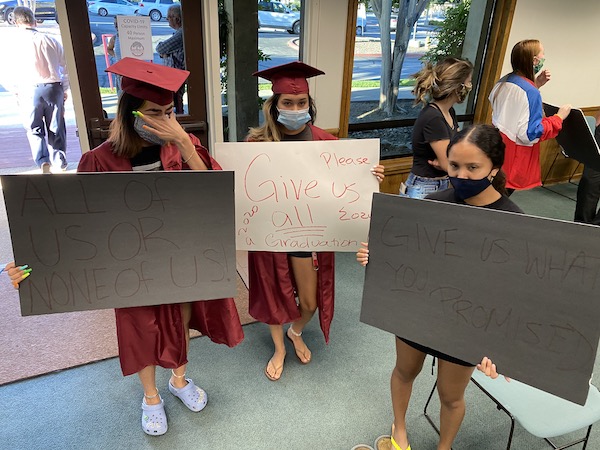 The emergency meeting was called after a directive from the state that the planned ceremonies violated the governor’s rules on “gatherings.” His definition allows public gatherings only for cultural, political, or religious events. That does not include high school commencement exercises.

The PRJUSD School Board met at 6 p.m. Tuesday evening. After voting unanimously that an emergency existed, they went into closed session. The vote was 6-0-1, with trustee Chris Bausch absent. When they returned, they took two votes.

The first motion was by trustee Chris Arend. He moved that the district go ahead with elaborate plans for numerous graduation ceremonies laid out by Assistant Superintendent Jennifer Gaviola and Paso Robles High School Principal Anthony Overton. Those called for a series of commencement exercises at War Memorial Stadium. They allowed for state-mandated safe distancing. That motion failed on a 2-6 vote with Chris Arend and trustee Lance Gannon casting the lone votes in favor.

Then, trustee Tim Gearhart moved that the administration develop alternative plans. Trustee Joan Summers seconded the motion. After a short amount of discussion, Superintendent Curt Dubost suggested that the administrators take a short break and discuss alternatives. They met in another room. When they returned after about ten minutes, the board revisited the motion.

The board members agreed that to defy an order from the governor was not in the best interest of the students or the district. They voted unanimously to direct staff to plan and execute alternative graduation ceremonies. 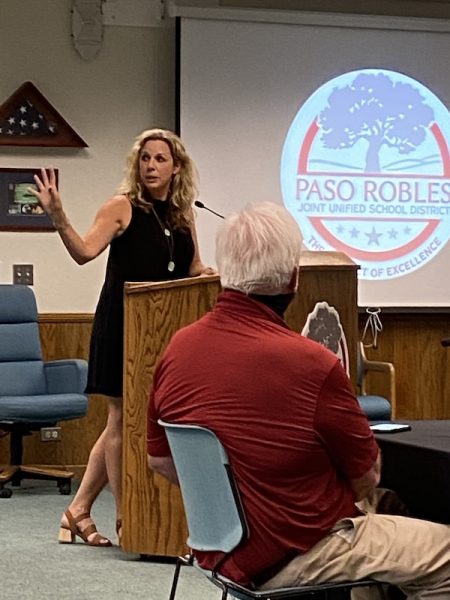 Shortly thereafter, the board adjourned the emergency meeting. The trustees left, and the administrators began making plans for a “drive-in” graduation exercise that complies with state regulations.

The first graduation was scheduled at 10 a.m. Wednesday morning, July 8, 2020. Liberty and Independence High Schools will be the first to participate in commencement exercise. That will be at 6 p.m. Wednesday evening at the Mid-State Fairgrounds. The other high school graduates will receive their diplomas Thursday or Friday at the Fairgrounds. Each ceremony will begin at 6 p.m. One car per graduate will be allowed (no limos or stretch vehicles). Gates will open at 5:15 p.m. and California Vehicle Code applies. Parents and seniors will receive more information in their emails from the district.