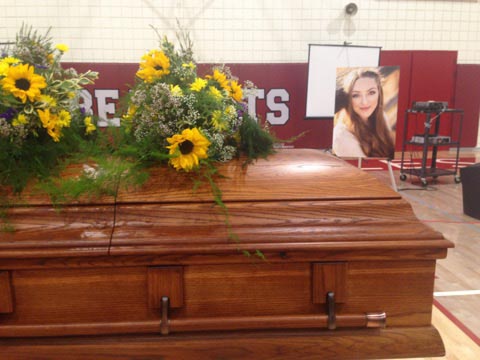 On Thursday, students attended a mock funeral held in the Gil Asa Gymnasium for the student, Cassidy Marisa Moses, who “died” during the program’s first day.

–Wednesday morning began the “Every 15 Minutes” program at Paso Robles High School, a two day anti DUI program wherein students are shown the reality of deaths caused by driving under the influence.

The program, sponsored by the California Highway Patrol, seeks to raise drunk driving awareness and bring to attention the reality the consequences for friends and families who lose loved ones to incidents involving intoxicated drivers. With the help of local law enforcement, hospitals, emergency medical responders, and other nonprofits, the program is able to create a dramatic and emotional scenario for the high school students.

The first half of the program, held on Wednesday, simulated a car crash involving students from PRHS which occurred on the football field at the school. Officers from the Paso Robles Police Department and EMTs arrive on the scene to find two cars completely totaled and examine the students involved for injuries.

Students who were participants in the program as victims or drivers in the crash were kept away from fellow students and social media until the following morning when the funeral services were to be held to create a realistic sense of losing a classmate to an alcohol related incident.

At approximately 10 a.m. Thursday, students attended a mock funeral held in the Gil Asa Gymnasium for the student, Cassidy Marisa Moses, who “died” during the program’s first day. During the assembly friends, classmates, and parents of the victim read letters to the student body. 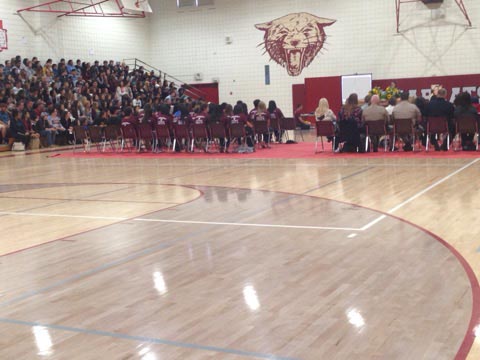 During the assembly friends, classmates, and parents of the victim read letters to the student body.

A video was shown which recapped the events of the program’s first day which were not seen by the students such as the victims being checked in to the emergency room, the arrest and booking of the surviving driver with a blood alcohol content 16 times the legal limit, and the family receiving news of their deceased child.

“I’ve experienced this program before and it’s always very impactful,” said Tina Lessi, a counselor at Liberty High School across the street, “it just takes so many different aspects of the community to bring it together and make it happen, and I think it’s particularly good timing with the prom on Saturday and students driving down to Madonna Inn in San Luis so I definitely hope that’s on their forefront.”

For more information about the “Every 15 Minutes Program”, check out the website at http://www.everyfifteenminutes.org/

Watch a video from the 2012 presentation of the program below: