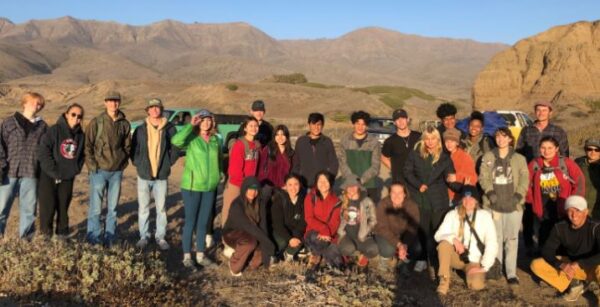 – The last students crawled from their camping tents as Paso Robles High School seniors Zoe Smith and Israel Perez laid out the rebar, T-posts, and data sheets in preparation for the day’s work on the western edge of Santa Cruz Island, 25 miles off the California coast.

The first rays of sunlight warmed the November air. Trip leaders Alisa Bredensteiner and Mark DiMaggio checked walkie-talkies and studied survey maps while students Kaila Jones and Itzia Zintzun quizzed each other on the scientific names of island plants.

As Paso Robles families prepared for their Thanksgiving gatherings, a select group of Paso Robles High School students took their education outdoors while gaining science credits and a chance to conduct botanical research on Santa Cruz Island, known as Limuw by the Chumash, who inhabited the island for some 10,000 years. The class is one of the courses offered through the school’s innovative Field Studies Collaborative (FSC) program, which seeks to offer impactful, real-world experiences to students.

“Throughout this trip, I could see how global climate change is affecting even the areas that seemed to be untouched by people,” said Zintzun, a senior. 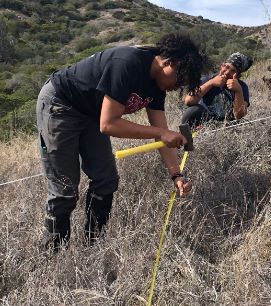 After camping in Ventura and taking a boat ride to the island through pods of Common Dolphins, the students tent-camped at Christy’s, a remote and historic ranch on the westernmost part of the island on the rugged coastline, with a view of neighboring Santa Rosa Island. Among the inquisitive Island Foxes and soaring Bald Eagles, the students removed invasive sea fig, conducted botanical surveys of the native Purple Needle Grass (Stipa pulchra), and established plots for a new project seeking to understand the impact of historic cattle and sheep grazing by studying thatch, the layers of dead annual exotic grasses.

“It’s so meaningful to be able to learn science, gain important life lessons, and spend time on sacred Chumash soil,” said Perez, who, along with Smith, served as one of the Teacher Assistants. “Santa Cruz Island Field Biology has changed my life.”

The research represents a unique partnership between Paso Robles High School, and both the University of California and The Nature Conservancy. The collaboration was begun in the 1990s by DiMaggio, longtime PRHS science teacher, who continues to lead trips after retiring from classroom teaching.

The island research is now overseen by Jay Reti, director of the Santa Cruz Island Reserve system and PRHS alumnus and Bearcat graduate (Class of 2002). Students learn methods of field biology to gather important data used to protect the unique island habitat. During the day students hiked the rugged canyons conducting field research, and in the evening they presented on unique features of Santa Cruz Island, such as the Island Scrub Jay, island ecology, the Island Fox, and the story of how the feral pigs were removed from the island. 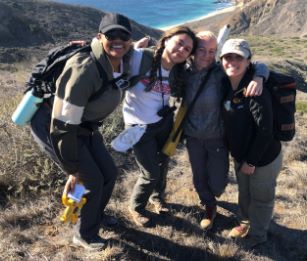 While on the island, students met with Rob Klinger, an ecologist for the Western Ecological Research Center of the U.S. Geological Survey, and who created many of the original study protocols in the 1990s. He was accompanied by Annie Meeder (Bearcat Class of 2017), now a graduate research student at Cal Poly specializing in the island’s botany.

As students returned home for the holiday, many reflected on their life-changing time on the island. “There was so much joy on this trip,” said Zintzun. “Now I know I can accomplish anything I put my mind to, and that feels good.”