Natalya Marcove has been playing soccer since four years old 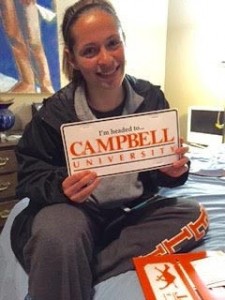 Marcove is heading to Campbell University.

–Not every child knows what they want to do when they grow up. From the early age of four, however, Natalya Marcove knew that she wanted to be a professional soccer player. “Ever since kindergarten and first grade, that was the dream,” she said.

Last September she visited and accepted a full-ride scholarship at Campbell University, a private college in North Carolina, to play Division I Soccer. Marcove was spotted by Campbell’s head coach who she said was not only interested in her as a player but as a person, as well.

“He’s super supportive as is my family who I would be nowhere without,” she said. “Although it’s far away, Campbell University has everything I want in a university including my perfect major so I knew it was the right fit for me,” said Marcove. “While I visited other schools they just didn’t feel right. Campbell University just feels like home, I’ve already met the entire team and I’ve even chosen my roommate.”

Marcove will be studying Kinesiology as a Pre-Physician’s Assistant and hopes to eventually venture forward with a graduate degree in that field. When asked how she would balance playing soccer with a full time student schedule, she answered with confidence: “I know my limits and am pretty disciplined when it comes to staying balanced. I’ve always been good at planning things and dealing with time management issues.”

Currently a senior at Paso Robles High School, it’s a transitional time for her, although she isn’t filling out college applications like so many others around her. “Honestly, I’m ready to start this new phase in my life.” 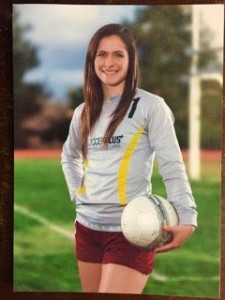 While Paso Robles High School offers soccer only two months out of the year, she has also belonged to the Santa Barbara Womens Soccer Organization, a year-round team that offers a greater degree of competition. She has been on the varsity team as a goal keeper since her freshman year at Paso Robles High. “She and I have built an incredible father and daughter bond through all of our car time spent heading to tournaments in Santa Barbara, Los Angeles, Las Vegas and beyond,” said Jeff Marcove, her father and a personal trainer at Kennedy Club Fitness in Paso Robles.

The plan is to head through college, play plenty of soccer, perhaps start on a professional team here in America or overseas in a place such as Spain and eventually come back home, she says.

“Since middle school, I’ve been telling everyone that I had to get to practice while making videos to send off to colleges,” she said. “Don’t give up on any dream. If you put enough time and effort into it, it will come your way although not overnight. I worked very hard to earn this!”