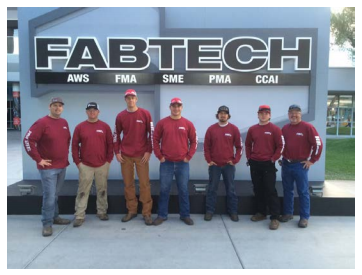 –Paso Robles High School Welding Technology program took 1st place at the 2016 Welders without Borders: Welding Thunder Fabrication Contest in Las Vegas. Seventeen high school and community college teams gathered from all over California, Utah, Nevada, and Arizona for this event. This is a competition, where a team of five students build a barbecue project from scratch in 1 ½ days. The team is graded on their blueprints, ability to follow their blueprints, quality of craftsmanship, individual graded welds, safety, team work, and special ingredient components. Unlike other welding contests that this program participates in, this contest requires that each team not only bring their metal and materials they will be working on but they also have to bring their own tools, equipment and power sources to construct their projects.

On Nov. 16, the students worked for 9 hours straight building the base model of the barbecue. This was the version that a majority of the score card followed, as each team had to replicate this same version. The following morning on Thursday the teams could then swap out parts and components for pre-fabricated pieces that were brought from home known as the “secret ingredients.”  After the four hours of secret ingredient swap-outs, they then had to fire up the barbecues and cook a meal for a judging panel. 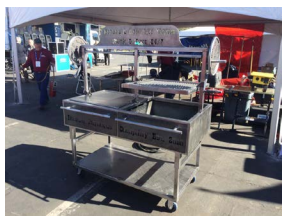 This year’s contest theme was “Griddle and Grill Las Vegas, Steak and Eggs 24/7. They put out a variation of steak and eggs and were awarded a second place overall in the cooking competition as well.

This contest took time, preparation and commitment from the students. They practiced every Sunday for four weeks prior to this event to make sure that they had dialed in building of this BBQ. In their off time, they also worked and practiced their welding skill and technique so that their graded welds were of the highest quality, including coming in to the shop over Veteran’s Day.

Find more information as well as updates from the program by liking their Facebook page:
https://www.facebook.com/PasoRoblesHighSchoolWeldingTechnology/