The California Highway Patrol reported that on Wednesday, May 13, at approximately 10:47 p.m., dispatchers received calls of a maroon Honda Accord weaving within the southbound lanes of Highway 101 south of King City. When the license plate of the vehiclewas run, it returned as a stolen vehicle out of Salinas. CHP officers located the vehicle in the vicinity ofHighway 101 at the Monterey County line heading southbound.

When officers attempted to stop the vehicle, the driver failed to yield and led officers on ahigh speed pursuit at speeds reportedly over 100 mph. Once in the city of Paso Robles, CHP says that the driver exited Highway 101 at North Spring Street and drove a series of city streets before turning north onto Vine Street, where he turned the headlights of the Honda off.

Shortly afterwards, CHP reported that the driver parked the vehicle at the intersection of Plymouth Hill and Loraine Way. The driver fled the vehicle on foot, the report said. CHP officers from Templeton and King City were assisted by Paso Robles Police Department officers, canine officers, and a CHP helicopter to search the area for the suspect. The driver was reportedly taken into custody without incident.

The driver, who was identified as Juan Machuca Gonzalez, 19, of Salinas, was arrested on charges of vehicle theft, possession of stolen property, evading arrest, driving without a license, and other charges. No further information is available at this time.

Video from scene at end of high-speed chase by SLOStringer 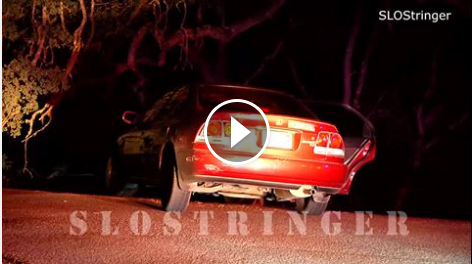