High speed chase ends in Shandon with arrest of couple

On Thursday at about 6:10 p.m., San Luis Obispo County Sheriff’s deputies responded to a report of a burglary of a home in the 5500 block of Martingale Circle in Paso Robles that was interrupted by the homeowner. The suspects were reportedly stealing tools from the home which was under construction. 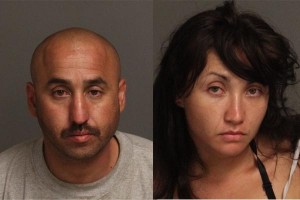 When the suspects fled, the homeowner began pursuing the car containing 40-year-old Derek Wolfe and 23-year-old Marissa Mize, both of Corona, on Estrella Road and approaching Highway 46. Sheriff’s Commander Ken Conway was driving an unmarked sheriff’s patrol unit on Highway 46, when he heard the call dispatched over the radio. As he was attempting to gather more details, the suspect’s car reportedly passed him on the right hand shoulder of the road while traveling in excess of 100 miles per hour.

A California Highway Patrol airplane was in the area of the incident and was able to locate and follow overhead while calling out the suspect’s location and speed which had at that point reached 120 miles per hour.