The driver of a white sedan led police on a dramatic high speed chase down Highway 46 East and through downtown Paso Robles Thursday. The chase continued on Highway 101 south through San Luis Obispo with California Highway Patrol cars and a helicopter in pursuit. 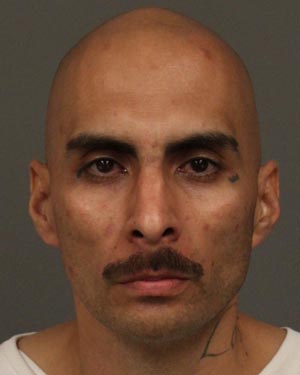 The pursuit ended when the suspect exited at Los Osos Valley Road fled the vehicle he was driving on foot in Paseo Ladera Lane. Officers arrested wanted parolee Angel Herrera III, 41. He was wearing body armor and had a handgun, according to reports. He was booked into San Luis Obispo County Jail and is being held in lieu of $50,000 bail. He is being held on felony evading officers, felony auto theft, and three other charges.

The chase began in Fresno. Local authorities were alerted as the suspect entered northern San Luis Obispo County on Highway 46 East. He was driving a stolen car at speeds over 100 miles per hour, according to reports.

A Paso Robles resident witnessed the chase as it passed near Golden Hill Road and took a short video as she was parked to the side of road. The resident told Paso Robles Daily News that she had been listening to details of the chase on a scanner and learned the following: the suspect vehicle and pursuing law enforcement were traveling westbound on Hwy 46 East and slowed down to 90 mph at Whitley Gardens before the suspect’s vehicle crossed over onto oncoming traffic at Branch Road and slowed to 75 mph. It then approached Vine St. at 24th before taking Vine to Hwy 101 south.

The resident said that Flamson and Bauer Speck schools were in lock down mode at the time in response to the chase.

Further information from Templeton CHP and SLO CHP dispatch was unavailable at publication time. According to a dispatcher, the case is currently under investigation. Paso Robles Daily News will provide updates as they become available. 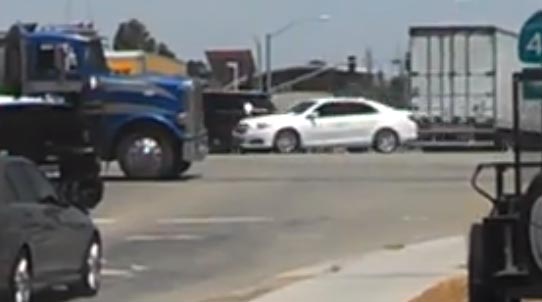 The driver of a white sedan leads police on a high speed chase.