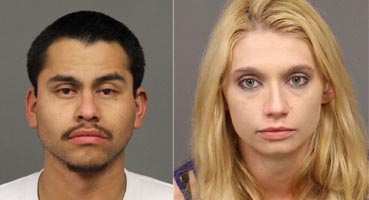 –A traffic stop made on a vehicle traveling in excess of 100 mph on Highway 46, just east of the Shandon Rest Area on Tuesday morning at approximately 8:40 a.m., resulted in the arrest of 21-year-old Paso Robles resident Rafael Aguilar Anguiano and 29-year-old Atascadero resident Jamie Michelle Cunningham, according to the California Highway Patrol.

Upon contact, the officer reportedly noticed objective signs of drug influence on the driver and passenger. After a brief investigation the driver was arrested for DUI of drugs and the passenger for being under the influence of a controlled substance.

During the vehicle inventory burglary tools and drug paraphernalia were located in the vehicle. Also located were several stolen lap top computers still in their boxes, a home computer, stolen credit cards, computer tablets, a car stereo, and miscellaneous software reported stolen from a school district in southern California. These thefts were linked to two additional stolen vehicles and multiple vehicle burglaries from Riverside County to San Luis
Obispo County.

The two were booked into the San Luis Obispo County Jail for DUl, being under the influence of a controlled substance, grand theft, burglary, and other charges.