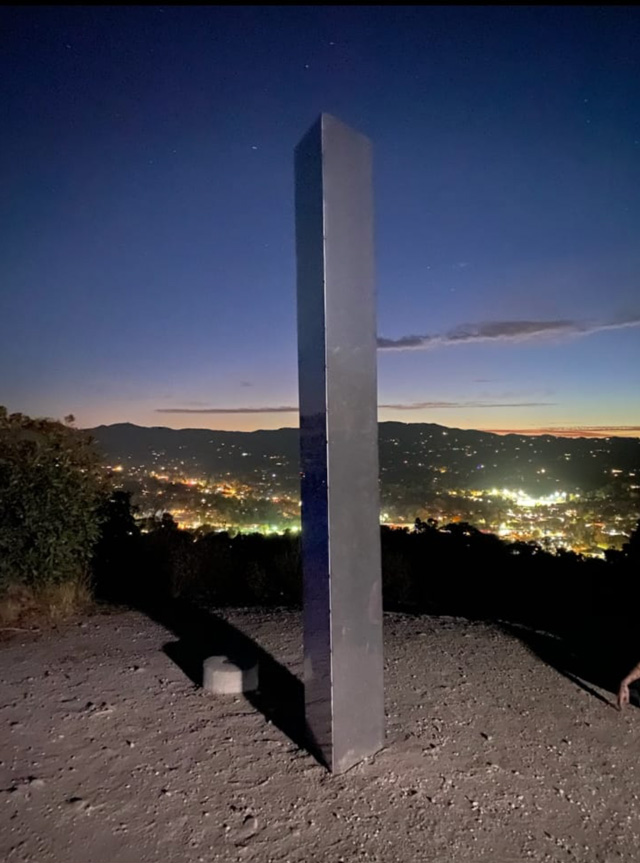 A photo of the Atascadero monolith on Wednesday evening by Heather White.

–The metal artists behind the monolith found in Atascadero on Dec. 2 have come forward to reveal their identities and explain how the nearly 10 foot high, 200-pound stainless steel structure first made its way to the top of Pine Mountain, as well as how and why it’s now back where it belongs, according to an interview by YourTango.

The four local men who created and installed the third monolith are Travis Kenney, his father Randall Kenney, Wade McKenzie, and Jared Riddle. 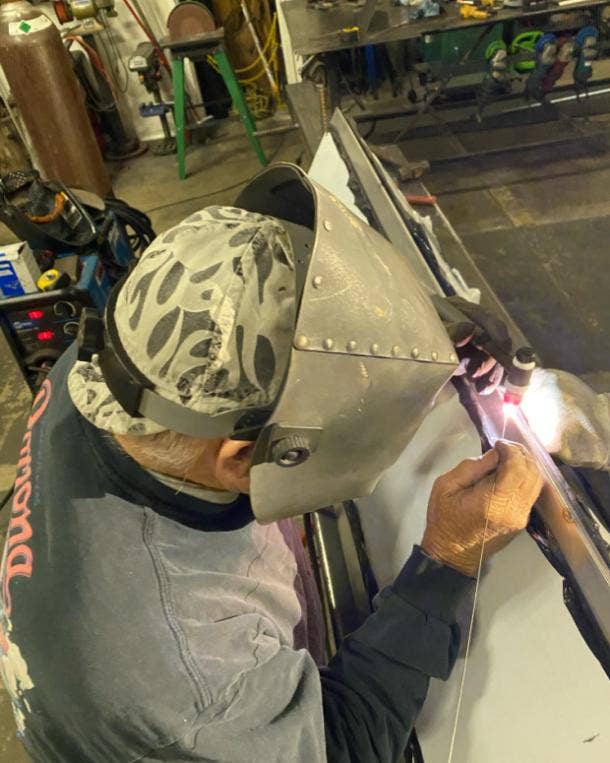 –On Wednesday afternoon, the City of Atascadero received reports from hikers of a steel monolith at the top of Pine Mountain in Stadium Park. Overnight, the monolith disappeared. All that remained as of Thursday morning was a hole with rebar sticking out.

Videos of a group of vandals removing the monolith were posted to DLive, a blockchain file-sharing website. The lengthy videos, titled “Monolith Raid,” were posted on Wednesday evening and Thursday morning by a user named CultureWarCriminal. The complete videos were posted here, but have since been removed. An edited version of the teardown can be seen here. Viewer discretion is advised.

A report on the video by Vice says, “…three men are seen pushing the statue over and chanting ‘America First’ and ‘Christ is King.’ The men, one of whom was wearing a ‘Make America Great Again’ headband, called part of the monolith’s construction ‘gay’ then replaced…monolith with a wooden cross.” 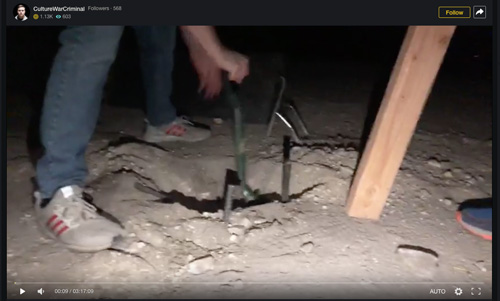 “The city has received the actual video that has surfaced on social media showing a group of men from out of the area removing the Monolith and replacing it with a plywood cross,” said Terrie Banish with the City of Atascadero. “The video shows them replacing the structure and talking amongst themselves.” 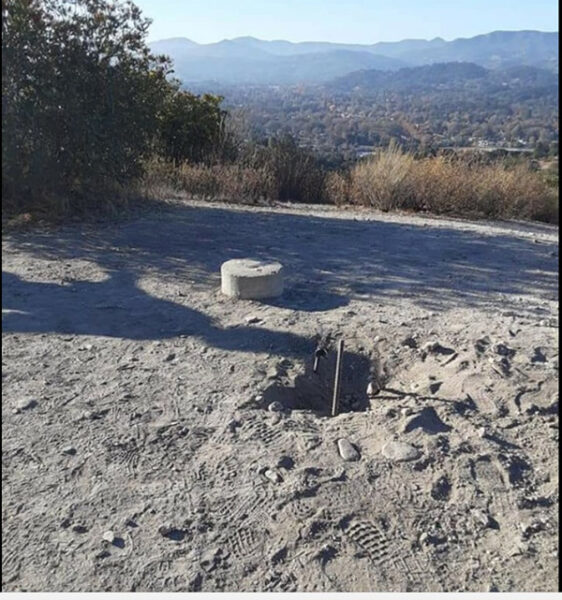 Atascadero Mayor Heather Moreno expressed frustration over the incident. “We are upset that these young men felt the need to drive five hours to come into our community and vandalize the monolith,” she said. “The monolith was something unique and fun in an otherwise stressful time.”

Currently, the Atascadero Police Department is reviewing the video and looking into this incident further, the city said in a press release. “We will provide updated information as soon as it’s available,” Banish said.

According to the city, the steel three-sided structure stood about 10 ft. tall and appeared to weigh an estimated 200 pounds. The area of Stadium Park offers a 2-mile looping trail up to the top or you can take a more challenging trail with a higher level of difficulty to the top that would be about a 30-minute hike. The altitude of Pine Mountain sits at 1300 ft. and there is no vehicle access to bring something that large to the top. The city owns and maintains 75 acres of the Stadium Park area and the five-acre entrance is owned and maintained by the Atascadero Land Preservation Society (ALPS). At this time, neither the City nor the ALPS have any information on how the structure found its way to the top of the mountain or who placed it there, the press release said.

Anyone with information about the monolith is asked to call the Atascadero Police Department at (805) 461-5051.

Local resident Yolanda Uribe might be the first person who saw the monolith after it was installed. “You know, I think I was the first to find it,” she says. “I walk every day at the same time and I meet two or three people normally, but that day I only saw one when I got back. She shared a video she took on Wednesday at 6:30 a.m. with Paso Robles Daily News: 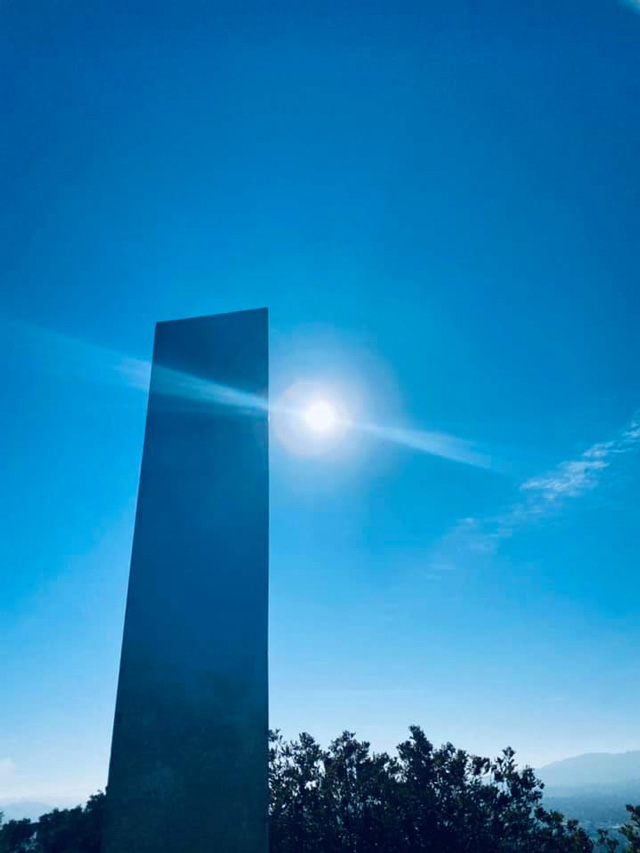 Photo of a mysterious object placed on a hilltop in Atascadero. Photo by Ronelle Volk.

–In something that could be right out of the 1968 movie “2001: A Space Odyssey“, a large shiny monument was discovered Wednesday at the top of a peak in Atascadero. It is three-sided, about 10-feet tall, and appears to be made of stainless steel. Observers have called it a monolith or obelisk, similar to the one reported in Utah last month.

Paso Robles resident Ronelle Volk came upon it Wednesday morning on a hike to the top of Pine Mountain. “I was hiking Stadium Park this morning, which I do about once a week, and as I was walking up the trail I was surprised to see something shiny at the top of the hill,” she said. “When I got to the top, it was a triangular prism and it looked to be about 10-feet tall and it was metal.”

“I was surprised to see it. Since I had no idea why it was there, I posted it on Facebook to see if anyone knew what it was for,” Volk said. “At that point, I didn’t know about any previous news story about the monolith in Utah. I thought it was interesting, and I was really curious as to who put it there and why. I also thought to myself, I would never again miss the right trail to head back down the hill because now I had a landmark. I spoke to another hiker who told me, he hikes the trail daily and it wasn’t there yesterday,” she said.

Several other local hikers followed the same trail on Wednesday and posted dozens of photos to social media. 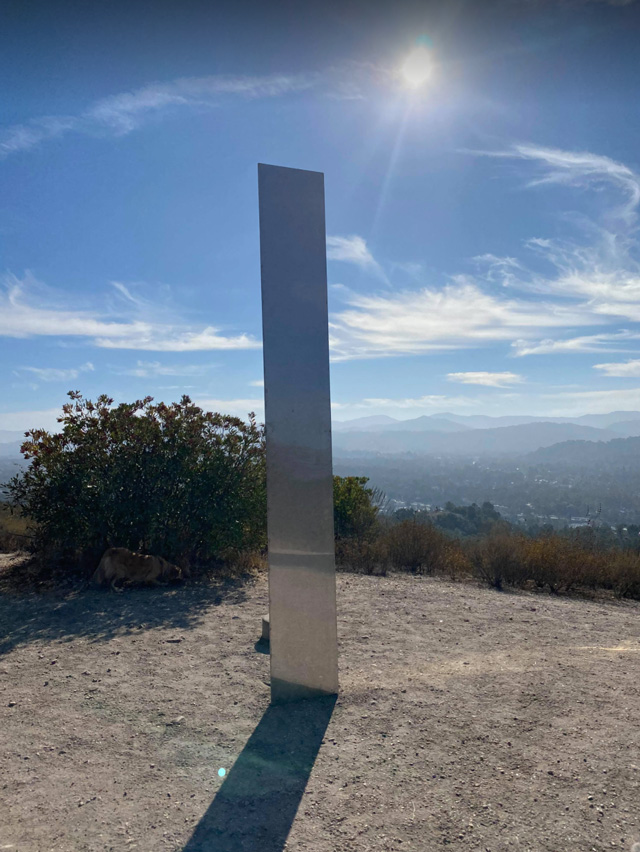 A metal monolith sits atop Pine Mountain in Atascadero on Wednesday. Photo by Ronelle Volk.

Terrie Banish with the City of Atascadero said the Atascadero Land Preservation Society oversees the property at Pine Mountain and had no additional comment on the monument.

Mike Orvis, president of the Atascadero Land Preservation Society, said he does not have any information on the monolith, when it appeared, or who is responsible. “Hikers have confirmed the structure is there,” he said. “2020 continues to be an interesting year!”

The City of Atascadero owns 75 acres which include Stadium Park and Pine Mountain, he said. “ALPS owns the five acres at the entrance to the park which includes the Bill Shepard Native Plant Garden,” Orvis said.

In November, Utah state biologists discovered a mysterious monolith during a helicopter survey of wild bighorn sheep in northern San Juan County, Utah. It was described as a non-magnetic metallic pillar that stood in a red sandstone slot canyon. The 9.5-foot tall monolith was made of metal sheets riveted together into the shape of a triangular prism.

It was dismantled and removed by four men at the end of November, the New York Times reported.

Less than two weeks after authorities found the mysterious object standing in the Utah desert, a similar monolith was reported nearly half-a-world away in the Romanian city of Piatra Neamt, NPR reported.

That makes the Atascadero object the third new monolith discovered in the past month. Other than the similarity of appearances, there is no evidence indicating the installations are connected. Speculation about their origins has ranged from the monuments being art installations, marketing stunts, pranksters, or copycats of the original monolith in Utah.

It didn’t take long for some social media users to find some humor in the mysterious installations. In this clip, a TikTok user shows a big foot creature placing a monolith in the woods: