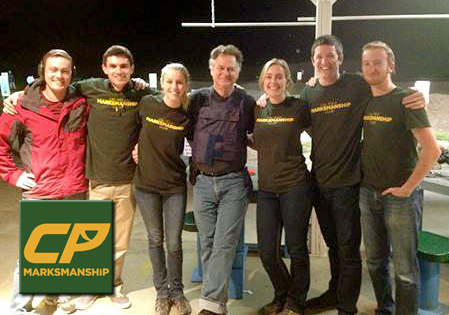 “We’re happy to support the Mustangs,” explained Hogue Vice President Pat Hogue. “We count a number of Cal Poly graduates among our employees and we’re looking forward to watching the CPMC grow and thrive in the years to come.”

The Mustangs took a turn in the national spotlight last year when several high-profile industry publications noticed how quickly the fledgling organization got off the ground, attracting almost sixty dues-paying members in a matter of months. They also attracted the attention of the National Shooting Sports Foundation (NSSF), which stepped up with a one-time $10,000 grant late last year. In addition to the NSSF, Hogue joins Smith & Wesson, Apex Tactical Specialties of Los Osos, and the San Luis Obispo Sportsmen’s Association, all of whom have announced support for club and earned logo space on the club’s new T-shirts.

“The Cal Poly Marksmanship Club would like to thank Hogue for their generous donation towards our general fund,” said CPMC President Michael Parker. “We’re proud to work with Hogue to continue providing our members with a safe shooting venue at San Luis Obispo Sportsman’s Association, safety classes and speakers at our on campus meetings.”

Besides its support for the marksmanship club, Hogue is a supporter of competition shooting sports, providing product and financial support to more than two hundred matches every year across the country, several of which are staged at the Hogue Action Pistol Range near Morro Bay – just 15 minutes from the Cal Poly SLO campus.