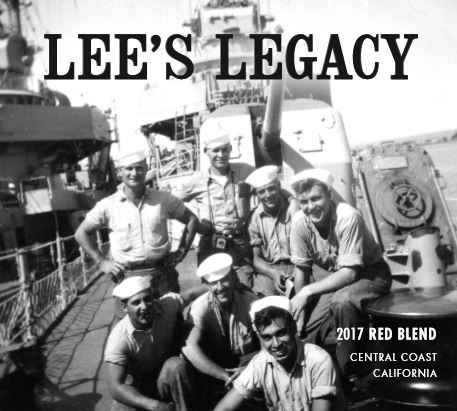 The Lee’s Legacy name and label honor the late James Lee, a WWII and Korean War veteran. Lee, a Bakersfield resident who passed in 2018, had a profound influence on Honor Flight coming to the Central Coast.

–Honor Flight Central Coast California is hosting a wine release party on Saturday, Nov. 13, from 1-4 p.m. in Hangar 1 of the Estrella Warbirds Museum in Paso Robles. The casual, drop-in event will herald release of Lee’s Legacy, a unique red blend wine produced by Pianetta Winery as a fundraiser for Honor Flight Central Coast California. The local Honor Flight is a member of a nationwide network of Honor Flight hubs that provide veterans with all-expense paid group trips to Washington, DC to visit the memorials honoring military service.

The Lee’s Legacy name and label honor the late James Lee, a WWII and Korean War veteran. Lee, a Bakersfield resident who passed in 2018, had a profound influence on Honor Flight coming to the Central Coast.

Lee was on the first Honor Flight for Kern County in 2012, accompanied by Greg McGill. McGill, a Templeton native and son of Bear and Shelley McGill, experienced a trip that not only fostered an enduring friendship with Lee, but inspired him to undertake creation of an Honor Flight hub on the Central Coast. The all-volunteer Honor Flight Central Coast California followed, with McGill’s father, retired SLO County Sheriff’s Correctional Deputy Bear McGill, stepping up to serve as board chair. The local group launched its inaugural flight in 2014 and has served several hundred local veterans from San Miguel to Carpinteria in the ensuing years. Any veteran is eligible for a trip, although due to age and health concerns, priority is given to WWII and Korean War veterans.

According to Honor Flight chair Bear McGill, the wine release party is special for a number of reasons. “We’ve waited almost two years due to Covid to release the wine for sale,” said McGill. “We wanted to do something special around Veteran’s Day to acknowledge our wonderful partners and honor our veterans.” He said the event will extend a public thank you to Pianetta Winery and to Sara Kroll of Topline Design, who donated design of the commemorative label, and will recognize members of the Lee family who are travelling to attend the party.

The wine release party will offer winetasting, beer and wine, food, a silent auction, wine and merchandise sales, and a chance to reconnect with friends. The Warbirds’ outdoor military aircraft area will be open to guests.

McGill notes the hangar’s open-air design makes for an ideal venue. All needed COVID-19 precautions will be in place. McGill said Honor Flight board members are holding the ticket price to $20. “We want people to come…and have money to buy wine!”

Tickets are limited and must be purchased in advance at www.honorflightccc.org/wine. The drop in event will include a short program at 2:30 p.m.