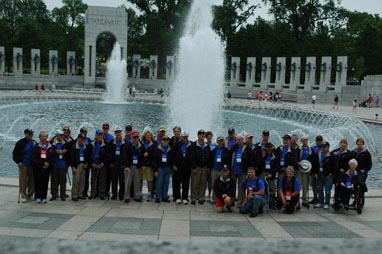 A photo from a prior year’s trip.

– When Honor Flight Central Coast California takes off from SLO Airport on Monday, April 4, it will be the first flight for the organization in the two+ years that COVID-19 shuttered trips. The 23 veterans on board will reflect another milestone: in addition to a 99-year-old World War II veteran and nine Korean War-era veterans, for the first time in the local organization’s history, there will also be a full contingent of Vietnam veterans rounding out the group.

According to Flight Coordinator Caralee Wade, nine Vietnam veterans will join other war-era comrades for the trip to visit the memorials that honor wartime military service. “We are so happy to have a group of Vietnam veterans on this trip,” said Wade. “Some of these veterans have been waiting for years as we made our way through World War II and Korea applicants, trying to accommodate our oldest veterans first.”

Wade said the trip will be extra special as flights resume after a long hiatus.“It’s exciting to be flying for the first time in two years and to be doing so with a group that represents multiple generations of military service creates a powerful reminder of what these veterans have done for us,” she said.

One of the veterans on the flight will be San Luis Obispo resident Fred Glenn, a founder of local CPA firm Glenn Burdette. Glenn, now retired, served in the U.S. Army in the 1950s and says he is looking forward to being a first-time visitor to the memorials, especially in the company of other veterans. “My service was more than 65 years ago, but it stays with me today,” Glenn said. “I know that’s true for every veteran. I am excited to have the opportunity to visit the memorials and share experiences with fellow veterans,” he said.

According to Honor Flight Chair Bear McGill, the inaugural 2022 flight is shaping up to be a big one. “We are geared up and ready for an amazing trip to Washington, DC,” McGill said. He noted that the mix of veterans that include Nipomo resident James Porter, who served in the US Navy in World War II and at 99 years old is the oldest veteran to ever make a local Honor Flight trip, along with Korean and Vietnam veterans, will make for an emotional, uplifting trip. “And when we return to SLO Wednesday evening, April 6th, our partners at Welcome Home Military Heroes are planning a welcome home tribute that I promise will leave a proud lump in everyone’s throat,” said McGill. He encouraged local residents to join in the welcome home rally at SLO Airport. “The more the merrier,” he said, “and boy, this group deserves it.” McGill said the flight is currently due to arrive at 9:02 p.m. on Wednesday, April 6, and that real-time updates will be offered on the Honor Flight Central Coast California Facebook page.

Since its founding in 2014, Honor Flight Central Coast California has taken several hundred local veterans on all-expense-paid trips to Washington, D.C. for VIP tours of the memorials that were built in their honor. All WWII, Korea, Vietnam, or other era veterans are encouraged to apply for a flight. “Our goal is to recognize every veteran in our community with a Tour of Honor,” said McGill.

Honor Flight Central Coast California is a member of the Honor Flight Network of 130 independent flight hubs that operate throughout the U.S. The all-volunteer local organization is 100 percent dependent on donations to fund the trips. More information at www.honorflightccc.org.