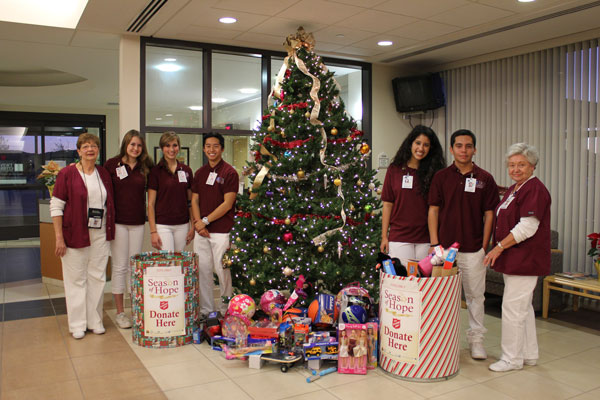 No local child will go without gifts, and no family will go without food this holiday season—not if Twin Cities Community Hospital has anything to do with it. The north San Luis Obispo County hospital extended their mission beyond healing and caring for the sick and injured of the community this winter by once again participating in the annual Season of Hope Fundraiser.

Twin Cities Hospital’s staff and volunteers chipped in to contribute to the over $22,000 in cash and gift cards, as well as the thousands of toys and pounds of food collected for the Season of Hope campaign.
Twin Cities reports that some of its most enthusiastic holiday gift-givers were also some of the youngest: Twin Cities Community Hospital’s student volunteers were tasked with going shopping through the Kmart® Cares program to purchase over $500 worth of toys for the toy drive.

“Everyone deserves a present this time of year,” said Templeton High School student and Twin Cities volunteer Ariana. “Something as simple as a Barbie®, or a basketball, can bring a smile to a family.”
High school volunteers from Paso Robles High School, Templeton High School and Atascadero High School put themselves in the shoes of the recipients and considered what gifts would be most appreciated or most easily shared among friends.

Judging by their brimming toy and food donations bins, though, the campaign was a hospital-wide group effort. Twin Cities CEO Mark Lisa says that both the staff and volunteers care deeply about the health and well-being of the community—every day and even more so during the holidays. “We know that the annual Season of Hope campaign helps bring some light, warmth, and happiness into local lives, and we are proud to be a part of that.”