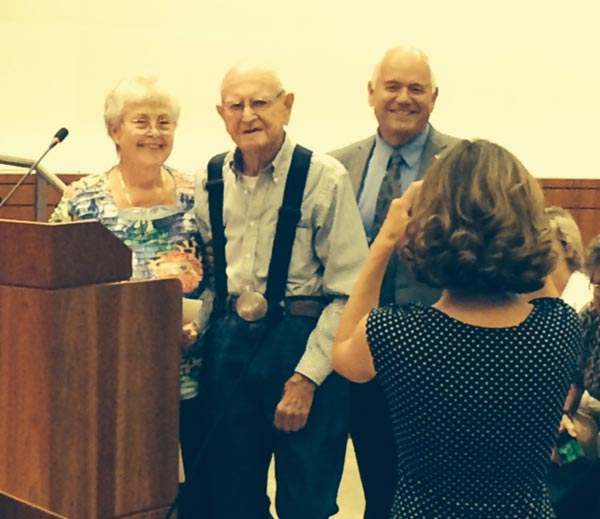 – In 1941, 15-year-old Hud Banks and a 19-year-old firefighter were returning to the station near Peachy Canyon when they spotted a toddler floundering in the Paso Robles Plunge off Lake Nacimiento Road. They drove to the outdoor pool and discovered the gate locked. Hud scaled the fence and rescued the 16-month-old girl, saving her life. Following the rescue, Hud returned to work as a firefighter.

A few months later, the attack on Pearl Harbor changed everything. Hud joined the US Marines and shipped off for the South Pacific. After World War II, he resumed firefighting in San Luis Obispo County. He married his wife of 67-years, Mumfie. Ultimately, Hud became Chief Banks.

On Tuesday, Hud received a Medal for Gallantry from Cal Fire and the Board of Supervisors for saving the life of the toddler back in 1941. Mumfie and several dozen retired Cal Fire personnel attended the celebration. Also in attendance, 75-year-old Kathy Hemmeter Reed, who was the baby who nearly drowned in the Plunge. The award presentation came about after she tracked down the young man who saved her life.

Shortly after her mother died, 75-year-old Kathy Hemmeter Reed discovered an article describing her near-drowning. Although she lived in Arizona, she tracked down 89-year-old Hud Banks in Paso Robles. She called the Banks and talked with Hud’s wife. Mumfie told her that Hud had been waiting all his life to hear what happened to the toddler he saved. In January, they rendezvoused in Yuma, where Hud and his wife travel each January.

Tuesday afternoon at the San Luis Obispo County Supervisors’ Chambers, Hud and his family gathered with retired and current Cal Fire personnel and Kathy Reed and her family. Hud received his award and spoke to about 150 people who attended the event. Then, Hud posed for pictures with Kathy Reed and members of her family.

It took nearly 75 years, but Hud finally received recognition for saving the life of a toddler at the old Plunge in Paso Robles. Additionally, Kathy Reed, her two adult children and her grandchildren thanked Hud for his quick-thinking back in 1941. His rescue saved the lives of each of them.