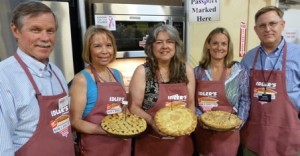 The annual event began as a way for the Idler family to celebrate and connect with the community. In 1984, Idler’s was coming up on 30 successful years of serving the Central Coast and had recently opened a new store in Atascadero. It was strong and growing, and the Idler family wanted to celebrate. The celebration had to acknowledge the company’s foundational values — Central Coast families, the home, bringing people together and “the best things in life.”

“The inaugural competition received only six entries,” said Don Idler, President of Idler’s. “Today we receive dozens of entries and the interest continues to grow. It’s heartwarming to see such a simple, old-fashioned tradition remain popular in SLO County.”

In 2014, as Idler’s celebrates its 60th anniversary as a company and the 30th anniversary of the Mom & Apple Pie Contest, the event has become a tradition for many, such as Marie Atkins, who, after participating in the competition for 19 years, took home the grand prize last year. This year’s event at the SLO Home Show marked the debut of Idler’s new name and look, Idler’s Home.