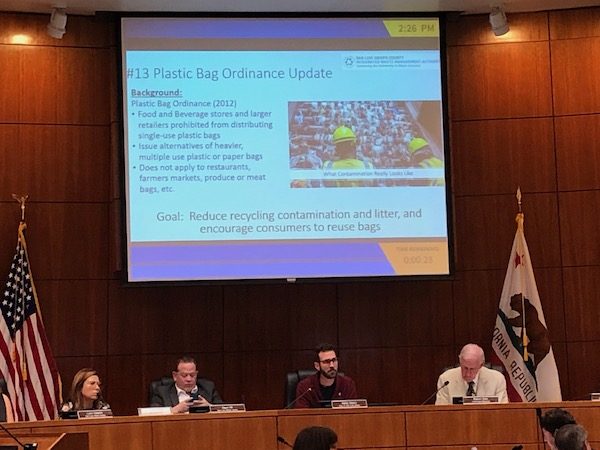 The ban is more stringent than the current restrictions on plastic bags.

–The Integrated Waste Management Authority Board of Directors tentatively approved a ban on many plastic bags in San Luis Obispo County, including those used at grocery and convenience stores. The board voted 9-4 Tuesday afternoon to advise staff to develop a draft ordinance to ban most plastic bags, including those used at Farmers Markets. Supervisors Lynn Compton, John Peschong, Debbie Arnold and Paso Robles City Councilman John Hamon voted against the man. Atascadero City Councilman Charles Bourbeau voted for the ban, but asked the IWMA staff to investigate the use of plastic bags in meatpacking at grocery stores and also in the use of dry cleaners.

About a dozen people spoke in favor of the ban, which is more stringent than the current restrictions on plastic bags. Some advocates said that they initially opposed the ban imposed by the IMWA in 2012, but grew to appreciate it. Several said it’s a positive step toward reducing the use of fossil fuels in the county. One of the strongest advocates is Supervisor Bruce Gibson, who is a retired petroleum geologist. Gibson previously worked for a major oil company for many years.

The IWMA is made up of representatives of each incorporated city in the county, and each member of the San Luis Obispo County Board of Supervisors. According to their mandate from the state, their mission is to reduce trash which ends up in local landfills.

Staff will return with the draft of the new ban on plastic bags at a future meeting of the IWMA Board of Directors.