Paso Robles News|Tuesday, January 19, 2021
You are here: Home » Sports » It’s Time To Change The Narrative About The 2016 NFL Draft Class 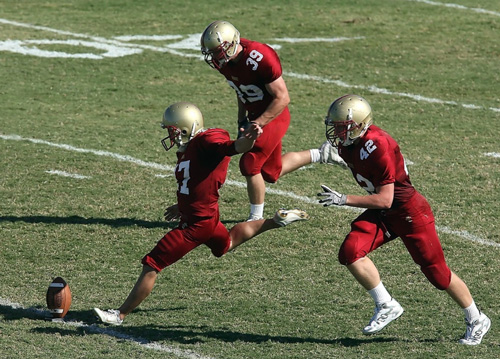 Is it too soon to say that the 2016 NFL Draft featured one of the worst first rounds in NFL history? When looking at the draft selections four years later, it’s hard to make a case that any of these teams are loving their first-round pick in 2020.

The draft featured names like Jared Goff going No. 1 overall to the Los Angeles Rams and Carson Wentz going No. 2 to the Philadelphia Eagles. When looking at the top-15 picks, you have to wonder if teams are wishing they could go back and change their choice. Let’s take a look at both sides of the argument.

The Case For Worst First Round

In 2020, Wentz has been the hardest quarterback to watch on free NFL streaming sites He leads the league in interceptions and has not been consistently healthy in years. Ever since 2017, Wentz has been a borderline average quarterback, which is precisely why the Eagles are struck in average mode. Outside of Wentz, Goff has had just one season that makes your eyes grow big. In 2018, Goff finished with 4,688 passing yards, 32 touchdowns, and just 12 interceptions. In the last two seasons, his touchdown to interception ratio is 39 to 26.

Other names in the first round are starting to trend down. Leonard Floyd taken at No. 9 was let go in Chicago after never living up to a true pass rusher. Eli Apple at No. 10 has bounced around and battled legal trouble. Ronnie Stanley (No. 6) and Jack Conklin (No. 8) are okay tackles, but nothing worth a Pro Bowl. Stretch down from No. 13 to No. 15 in Laremy Tunsil, Karl Joseph, and Corey Coleman, all are underwhelming players.

While some teams may be upset with these players, look at the initial investment. For starters, Goff has played well enough to lead the Rams to the playoffs NFL 2020. No. 3 overall picks Joey Bosa has been one of the best pass rushers in the last half-decade, while Ezekiel Elliott (No. 4) is a three-time NFL rushing champion. While Zeke has not played well this season, can you blame him given the team’s quarterback is injured for the season and all but four starters on the offensive line are injured?

As for Wentz, he might just need a change of scenery. In 2017, he was on pace for an MVP season before Nick Foles led the team to a Super Bowl. If Wentz was playing, he would have likely led the team to the Super Bowl too.

Along with that, we haven’t even mentioned 2018 Pro Bowl pass rusher DeForest Buckner taken at No. 7 overall, and the highest-paid cornerback in NFL history in Jalen Ramsey taken at No. 5. For those of you who are upset about the current season, remember this was a pandemic because the top-10 of this draft is pretty solid.

Look At The Numbers

This draft gets a bad rap because Wentz is playing like the worst quarterback in the league. With Goff, Floyd, and Ramsey paired together, the Rams are on pace to win the NFC West. Zeke will play better next season when the team is healthy. Buckner is leading the Colts defense to a top-5 finish and a playoff appearance. Once the Chargers rebuild, Bosa will be remembered again. People have already seemed to forget that he was a First-Team All-Pro in 2019.

With Stanley, Conklin, and Joseph who are all starters in the league, you could make a case that this was a great draft class.