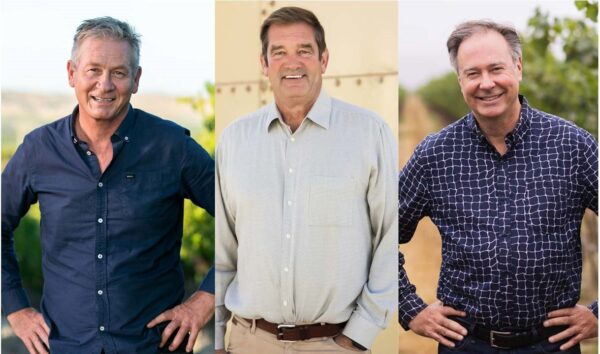 – J. Lohr Vineyards & Wines has announced the promotion of industry veterans Director of Winemaking Steve Peck to the position of Vice President, Winemaking, and Plant Manager Ian Herdman to the position of Vice President, Production, with J. Lohr Vineyards & Wines. Signaling a streamlining that also sees current Chief Executive Officer Steve Lohr take on the additional position of President, this new structure recognizes the achievements and responsibilities of key individuals in the family-owned-and-operated winery after the retirement of President/COO Jeff Meier in December 2021. Peck and Herdman will henceforth report to President and CEO Steve Lohr.

“Steve Peck and Ian Herdman have demonstrated substantive experience and leadership in their respective disciplines here at J. Lohr. We couldn’t be more pleased to celebrate their impact on our business, and the wine industry at large, with these advancements,” said founder Jerry Lohr. “Simultaneously, CEO Steve Lohr is adding to his scope of responsibility and oversight within J. Lohr, assuming the additional role of president. I am very proud of all three of these talented individuals and their proven abilities to lead J. Lohr into its next chapter.”

Appointed J. Lohr Red Winemaker in 2007, Steve Peck quickly drew on his passion for viticulture, comprehensive knowledge of winemaking practices, and his palate to oversee red wines within the acclaimed J. Lohr Estates, J. Lohr Vineyard Series, J. Lohr Gesture, and J. Lohr Cuvée Series tiers. In his youth, Peck worked alongside his uncle and became a dedicated home winemaker who learned the importance of hands-on attention to detail during every step of the winemaking process, which inspired him to enroll at UC Davis. While studying fermentation science and chemical engineering, Peck put himself through school as part of the team at Joseph Phelps Vineyards, which augmented his academic studies with a practical understanding of premium Napa Valley winemaking methods. After earning his degree, Peck pursued opportunities within the biotech industry, working for Merck and Co. and Genencor International, while continuing to craft his own wines. Eager to return to a career in winemaking, he joined Five Rivers Winery as winemaker in 2001 and was also responsible for producing red wines for Jekel Vineyards beginning with the 2004 vintage. In these capacities, Peck worked with an extensive array of vineyards in Monterey County, Paso Robles, and Santa Barbara County, orchestrating harvest for dozens of growers.

Peck, who has consistently earned acclaim for his red wines, was named the ‘2016 Winemaker of the Year’ by the San Luis Obispo wine industry and was featured in the 2017 book The Winemakers of Paso Robles. In his role as Vice President, Winemaking, Peck will oversee the full J. Lohr portfolio, which includes the J. Lohr Pure Paso Proprietary Red Wine and J. Lohr Signature Cabernet Sauvignon, among additional tiers, and will collaborate with Winemaker, White Wine Kristen Barnhisel and Red Winemaker Brenden Wood to ensure the exceptional quality for which J. Lohr’s wines are known. A genuinely personable leader with deep technical acumen, Peck has served as Board Director for the Vineyard Team and is Board Vice President with the Paso Robles CAB Collective.

In his new role, Ian Herdman will oversee all aspects of J. Lohr’s operations across three counties, including its Paso Robles and Greenfield wineries, and the company’s winery, warehouse, and bottling operations in San Jose. Herdman’s promotion to Vice President, Production, is the culmination of a 30+ year career on California’s Central Coast, during which time he established a reputation as one of the most knowledgeable operations executives in the wine industry. Herdman, who was born in Newcastle, England, earned a degree in agricultural science from Durham University and pursued advanced studies at the University of Minnesota, St. Paul, before beginning his career at Mirassou Winery, where he spent 12 years and achieved the position of cellar master. In 2001, Herdman joined J. Lohr, where he spent four years excelling in the role of assistant plant manager before becoming director of operations for Tolosa Winery/Courtside Cellars in 2005. In 2017, Ian returned to J. Lohr, taking on the role of plant manager for its Greenfield and Paso Robles wineries.

Herdman is widely known for his acumen, wit, and congenial resourcefulness and was honored by the Paso Robles Wine Country Alliance with its ‘2020 Unsung Hero’ Award. In addition to overseeing operations for J. Lohr, Herdman was recently appointed to the Board of Directors of The Vineyard Team, which is internationally recognized for its leadership in sustainable education and advocacy.

“We are thrilled to elevate both Steve and Ian to these key roles within our executive team, which includes my siblings, Chief Brand Officer, Cynthia Lohr, and COO, Vineyards, Lawrence T. Lohr,” said J. Lohr President & CEO, Steve Lohr. “Both Steve and Ian exemplify and inspire their colleagues to hold the highest of standards in our collective pursuit of the best wines possible. They have made invaluable contributions to our operations and the quality of our wines, all while helping us successfully navigate the unprecedented changes required to adapt to the pandemic. These two promotions also speak to the deep bench of talent we have established here at J. Lohr.”