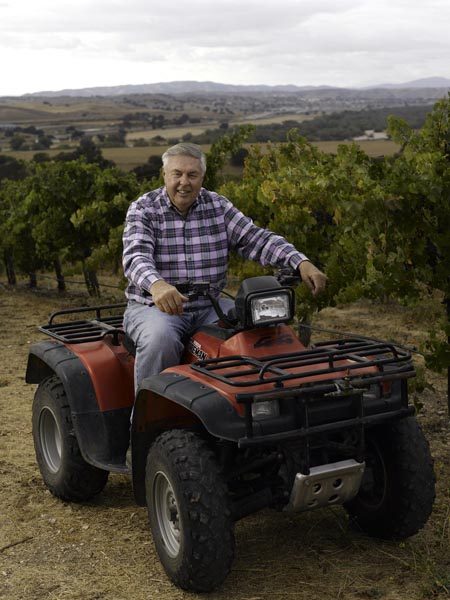 Jerry Johr at Snowden Vineyard on his ATV.

– Wine Enthusiast Magazine has announced that it will be honoring industry visionary and Central Coast wine pioneer Jerry Lohr as its “American Wine Legend” at the upcoming 17th annual Wine Star Awards. Lohr will be honored in Wine Enthusiast’s special “Best of Year” issue, and at a black-tie gala in Miami on Mon., Jan. 30. While the Wine Star Awards ceremony is an annual event, the American Wine Legend honor has only been awarded three times since 2000.

As the founder of J. Lohr Vineyards & Wines, Lohr is widely recognized for helping to bring the wines of Paso Robles and Monterey County to global prominence. A past chair of the Wine Institute and the founder of several leading trade and research organizations, he is also a tireless wine industry advocate who has played an integral role in advancing the American wine industry. In recognition of his accomplishments, Lohr is being honored by Wine Enthusiast for his “energy, courage, groundbreaking vision and business acumen,” and his “invaluable contributions to the industry.”

“What Robert Mondavi was to Napa Valley, Jerry Lohr is to the Central Coast, leading and elevating an entire viticultural region from Monterey to Paso Robles with perseverance, dedication and a passion for quality,” said Adam Strum, the chairman of Wine Enthusiast Companies and the editor and publisher of Wine Enthusiast.

In 1972, while Mondavi and others were shaping the wine landscape of Napa Valley, Jerry Lohr was one of a handful of early pioneers establishing a new outpost of wine-growing excellence on the Central Coast. The son of a hard-working South Dakota farming family, and an engineer by trade, Lohr understood early on that every crop excels under very specific growing conditions. Since planting his first Monterey County estate vineyards in 1972 and his original Paso Robles vineyards in 1988, Lohr has helped to define quality in Central Coast viticulture. At the same time, he has established J. Lohr Vineyards & Wines as one of the most respected and successful multigenerational family-run wineries of its size in the world, with more than 5,000 acres of estate vineyards in Paso Robles, Monterey County and Napa Valley.

In addition to building J. Lohr into an acclaimed brand that has introduced millions of wine drinkers in more than 40 countries around the globe to the wines of Monterey County and Paso Robles, Lohr has devoted much of the past 45 years to the industry as a whole. As a leader, consensus builder, and an advocate for change, experimentation, and sustainability, his influence has been wide-reaching. Among his accomplishments, he is the cofounder and a four-time chair of the Monterey Winegrowers’ Council, one of four founding members of Wine Vision, and a founding chairman and current director of the National Grape and Wine Initiative.

Lohr is also a major benefactor of research and education in viticulture and enology. In addition to being a two-time chair of the UC Davis Executive Leadership Board, and a former member of the UC Davis Chancellor’s Advisory Committee, Lohr was the second largest donor to the UC Davis LEED Platinum Research and Teaching Winery. He also made a million-dollar pledge towards building a new teaching and research winery at Cal Poly, and provided more than ten million dollars in endowments to his alma mater, South Dakota State University, including funding for the Jerome J. Lohr College of Engineering.