Jesse Thomas had his fifth straight Wildflower Triathlon long course men’s victory and fellow Bend, Oregon resident Heather Jackson was leading the women’s race only to have Liz Lyles pass her 200 meters from the finish to end Jackson’s quest for a Wildflower four-peat. 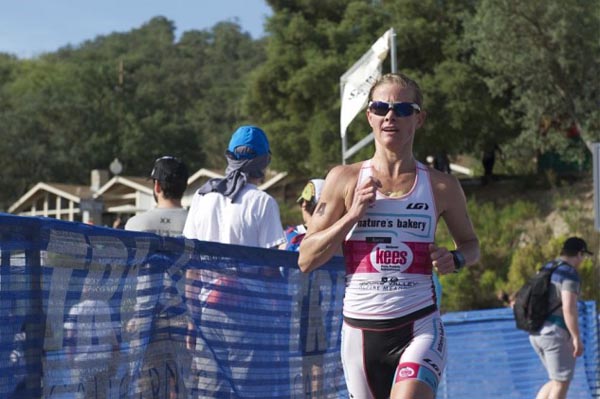 Jackson and Lyles erased almost all that margin with 13:45 split for the 2.2 mile run to the transition – but did not gain anything on McBride who took off out front on the 56-mile bike leg.

Jackson caught McBride at mile 10 and led to mile 25. “At that point Rachel came by me,” said Jackson. “On the final hill after Nasty Grade, she surged and got a bit of a gap, maybe 45 seconds. I told myself this was OK – I had confidence in my run.”

McBride started strong on the 10.9- mile run, Jackson took back the lead in the second mile. “After I took the lead, I started cramping,” said Jackson.

While Jackson was suffering, McBride ran past Jackson and opened a lead. By mile 9 of the second run, Jackson spotted McBride ahead on a paved section. “All of a sudden I could see her and I could tell she was imploding. So for about four minutes I was thinking ‘Oh my God! I’m going to be able to do it!'”

Then things took a surprising turn for Jackson. “Then the lead bike guy who was with me said ‘Oh, she is coming back. It looks like she is closing on you.’ I thought he meant Rachel. Then I looked back and it was Liz Lyles. She looked really fresh.”

Jackson held a 20 yard lead at the start of the big downhill and held the margin until she reached the flat ground with 400 meters to go.

“I didn’t gain anything on the downhill,” said Lyles. “When it flattened out, I closed my eyes and told myself, ‘Liz, give it one little kick here.’ When we hit the finish chute, we were shoulder to shoulder and I told myself, ‘Just do a 30 second pickup.’ I picked it up and she didn’t respond. Then I just tried to hold my lead down the straight.”

“All of a sudden I had nothing left and she just took off,” said Jackson.

Jackson, seriously dehydrated, collapsed at the line a few seconds back of the winner.

Jackson put on ice to reduce her core temperature and had three IV bags and was back to normal an hour later. “Once Liz took off, I have no memory about the final chute,” said Jackson. 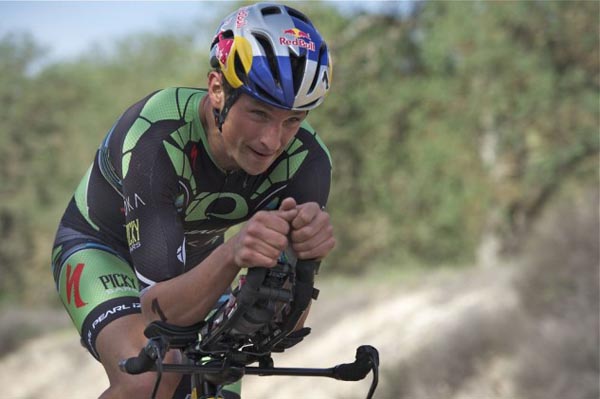 The win was Thomas’s 5th in a row at this half Ironman-distance classic, putting him one win ahead of Chris McCormack and Cameron Widoff, neither of whom won four in a row.

“It is really cool to hear my name mentioned with some of the legends of the sport,” said Thomas. “And over the years I’ve beaten some guys that race real well – Joe Gambles, Jordan Rapp, Leon Griffin, Andrew Starykowicz and James Cunnama. So I’m happy with it.”

The race began with swift swims by Davide Giardini of Italy and Brian Fleischmann of Colorado Springs, who exited the swim with nearly identical 22:05 splits – and 2:27 ahead of a pack that included Thomas, Lieto, Chris Leiferman, Derek Garcia, Matt Reed and Mark Bowstead. On the run through the dry reservoir, Thomas and Reed blazed past that crowd with sub-12:30 splits that brought them within two minutes of Giardini and Fleischmann. On the bike, Thomas left Reed behind, caught and passed Fleischmann at Mile 30 and arrived at Giardini’s wheel at the bottom of the “Nasty Grade” climb at mile 40.

After climbing “Nasty Grade,” Thomas said that he felt strong and rode away to lead the field into T2. “To have the luxury of the lead after the bike is something I’ve experienced in just 1 or 2 races,” said Thomas. “So I tried to relax on the run and keep myself from cramping.”

Thomas’ 1:10:05 split for the final run was enough to hold off Lieto – who had nearly identical swim, bike and second run splits but lost the race grinding through the riverbed sand after the swim.

Lieto said this was the best race of his career. “My goal was always to be on the podium here. Back in 2011 I convinced Jesse [Thomas] to race here and he won and bumped me off the podium – I was 4th. So it was a dream come true for me to be second here. You want to win every race you enter, but Jesse is the man at Wildflower.”