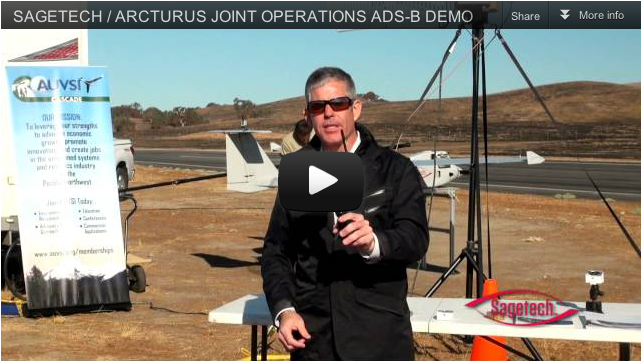 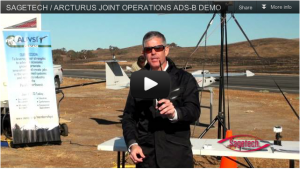 The feasible integration of manned and unmanned aircraft came one step closer with a flight demonstration over central California.

At the October 24 demonstration over McMillan Airfield in Camp Roberts, Calif., both aircraft used Sagetech XP transponders to broadcast ADS-B position messages. The Cirrus SR-22 pilot and UAV ground operators received those messages with Sagetech Clarity receivers, which relayed them via wi-fi to an iPad. Using an Electronic Flight Bag app like Hilton Software’s popular WingX, the iPad clearly displayed the positions of both aircraft as they flew—each a named icon indicating its exact location, heading and altitude.

“Even when I couldn’t see the UAV visually from the cockpit, I could see it electronically on my iPad, including its heading,” said Kelvin Scribner, the pilot of the Cirrus SR-22 and president of Sagetech Corp. “And it was right there on the aviation charting app I already use in flight, Hilton Software’s WingX.”

Currently, unmanned aircraft are not permitted to fly outside restricted airspace in the U.S., because their small size makes them invisible to pilots and virtually undetectable by radar. But sharing the airspace would be beneficial for situations such as wilderness firefighting, where temporary flight restrictions (TFRs) prohibit most outside aircraft. Within that restricted space, UAVs equipped with ADS-B transponders could work alongside manned aircraft to monitor fire activity and manage firefighting strategies, with lower risk and at a lower cost than helicopters. Other potential manned/unmanned joint operations include disaster relief efforts and search-and-rescue operations.

“I’ve been waiting to see this for a long time,” remarked Brian Whiteside at the McMillan Airfield demonstration, tracking both aircraft on his smartphone. Whiteside is president of VDOS, a McMinnville, Oregon company that provides data operations support for UAVs. “As an operator, this is exactly what I need. I could see deploying it next year.”

About Sagetech Corporation
Sagetech Corp. provides world-class engineering and manufacturing of key avionics components to the aviation industry. The company currently designs and builds the world’s smallest transponder for the UAV market. Founded in 1998, Sagetech operates out of four facilities in Hood River, Oregon and White Salmon, Washington. More information is available at http://www.sagetechcorp.com.

About Arcturus UAV
Arcturus UAV has been designing, manufacturing, and flying UAVs for nearly a decade. Specializing in composite material engineering and construction with materials such as carbon fiber and Kevlar, Arcturus UAV reduces aircraft weight while increasing strength and rigidity. System integration and ease of payload changes through the use of interchangeable pallets has made Arcturus UAV the platform of choice for missions requiring specialized airborne equipment. More information is available at http://www.arcturus-uav.com.