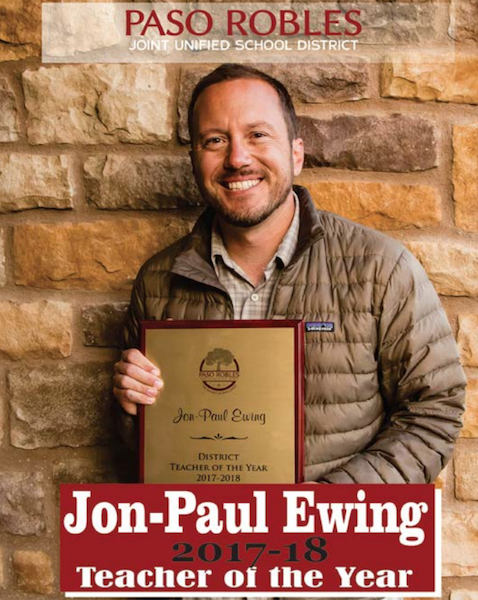 –Jon-Paul Ewing, the science teacher and department head at Paso Robles High School, was named the District Teacher of the Year by the Paso Robles Joint Unified School District.

Ewing grew up in Paso Robles, attending our dual immersion elementary school, graduating
from PRHS in 1999 and attended Cal Poly. He studied abroad advancing his ability to be bilingual and serve all students and families in Paso Robles. He was hired at PRHS in 2006.

In his tenure at PRHS, he was acknowledged at the state level as a finalist in the Presidential Award for Excellence in Math and Science for the state of California (2015). Ewing is a passionate and driven teacher. Ewing has worked with, and led, his science team by the following: development and creation of a state model of integrated science pathways, designed an Honors Marine Biology Course with a partnership NOAA and marine tidal research, creation of an Honors Anatomy Course, and a founding teacher in our Crimson Crew program to help 9th grade students transition to high school. In addition to these accolades, he recognizes staff and students weekly through a positive recognition process, coaches track and the cross country team.