Under California law, a juvenile may only be incarcerated until 25th birthday 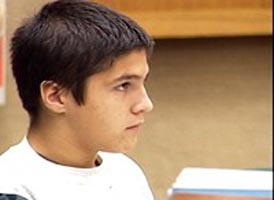 Roberto Roman Holguin was 13 at the time of the offense. Photo from Murderpedia.

On February 17, 2006, Holguin, a resident of San Luis Obispo, was found to have committed murder in the first degree, residential burglary, robbery, elder abuse and vehicle theft. The victim was 87-year-old Gerald O’Malley. Holguin was tried as a juvenile because his age at the time of the offense, 13, precluded him from being tried as an adult. Holguin was sentenced by the Juvenile Court Judge to 42 years to life, however, due to his age, the potential confinement for his crimes totaled approximately 12 years. Under California law, a juvenile may only be incarcerated for a juvenile crime until his 25th birthday.

Governor Brown has twice reversed the Juvenile Parole Board’s earlier decisions to grant Holguin early discharge from custody, once in 2014 and again in 2015. This time, Governor Brown declined to exercise his authority to reverse the decision for early release. Holguin could have remained in custody for approximately eight additional months.

With this decision, Holguin will be escorted by San Luis Obispo County Probation officials to the State of Texas where he will live with a family member. Holguin will remain under the supervision of Texas authorities until his 25th birthday on December 15, 2016. It is hoped that this period of supervision will assist Holguin in his transition to independent adult life after having been in-custody since he was thirteen years of age.

“The District Attorney’s Office has done everything we could do from the very beginning in this very disturbing murder case,” said District Attorney Dan Dow.  “Mr. Holguin was convicted of first-degree murder and then sentenced to the maximum amount of custody that California law allows for a thirteen year old defendant. It is our hope that Mr. Holguin is remorseful for his brutal acts, that he fully appreciates his new freedom, and that he will commit himself to living a productive and crime-free life.”

This case was originally investigated by the San Luis Obispo Police Department and prosecuted by Deputy District Attorney Andy Baird.