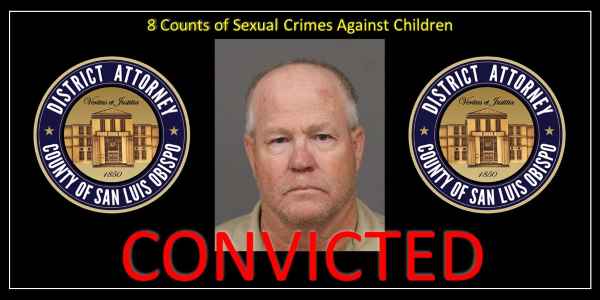 –  After a three-week-long jury trial, a San Luis Obispo County jury found Santa Margarita resident Michael Anthony Brians guilty of eight felony sex crimes against three minor children, according to the San Luis Obispo County District Attorney’s Office. Two additional victims were allowed to testify about the defendant also abusing them when they were children for acts that were not able to be charged separately because the statute of limitations had expired. However, their voices were not silenced, and their testimony was allowed under Evidence Code section 1108 as a prior instance of sexual abuse. The sexual abuse of the five female survivors occurred as early as 1983 and as recently as 2016.

“We thank the jury for their efforts in this sensitive and emotional case,” said District Attorney Dan Dow. “The survivors demonstrated remarkable courage by reporting the crimes which encouraged other survivors to come forward. We commend these women for their strength to testify and their support which was necessary to bring this predator to justice. This conviction should encourage other survivors of sexual assault to report the conduct to law enforcement.”

Sentencing is scheduled for Dec. 13, 2021, at 8:30 a.m. in Department 1 of the San Luis Obispo County Superior Court, the Honorable Judge Jacquelyn H. Duffy presiding. Brians faces 90 years-to-life in state prison for his conviction.