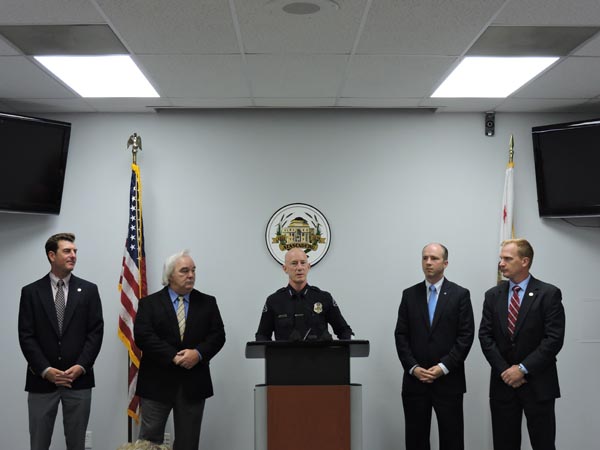 – A press conference was held today in Atascadero regarding the arrest of a 17-year-old local high school student who is a suspect in the investigation surrounding the San Gabriel School incident that happened on Sept. 11. Threats and objects found on the playground forced the school to close for over a week.

According to Police Chief Jerel Haley, the suspect was believed to have acted alone. He is currently in custody and is being detained at the County’s Juvenile Detention Facility.

More details were released regarding the incident, such as the contents of the letters that were placed at the doorways of each teacher’s classrooms, pictured below. The suspect appeared to have been conducting a sort of, “game” with the teachers, much like the movie Saw, and the suspects actions appear to have been designed to evoke fear and panic, according to Haley. 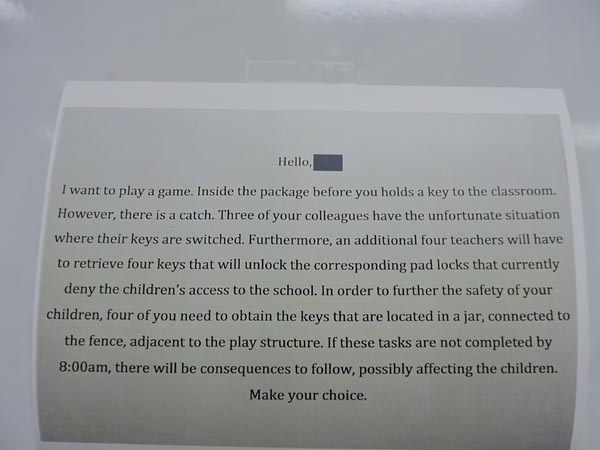 The suspect appeared to have been conducting a sort of, “game” with the teachers, much like the movie Saw, and the suspects actions appear to have been designed to evoke fear and panic, according to Atascadero Police Chief Jerel Haley.

The contents of the suspicious object found on the playground were also described in more detail. The object was a candle jar, with the wax removed and a different liquid put in, and it was zip-tied to a fence. There was a note found nearby by the suspect identifying the liquid as “cyanide.” The liquid put it was found to be sodium ferrocyanide, a common chemical used in photo processing, mixed with a mildly acidic liquid that was not strong enough to emit cyanide gas, and would only be harmful if ingested.

It is unclear now as to whether the suspect will be tried as an adult of as a juvenile. The search warrants issued proved to be successful, and the investigation is still ongoing. Officers found items that connected the suspect to the crime in the search. The investigation was able to nail down a suspect by tracking purchase histories of items used to commit the crime. 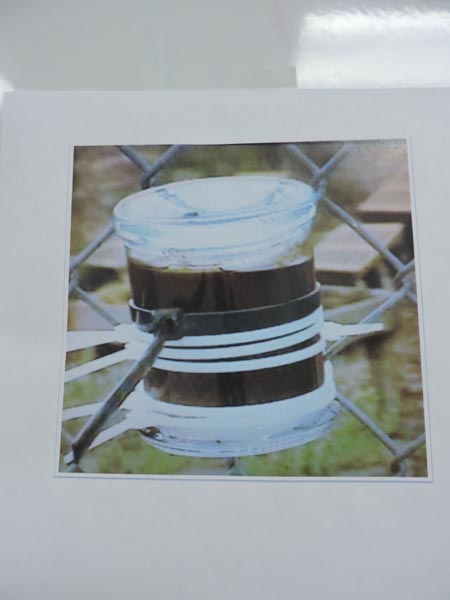 The suspicious object found on the playground.

There are currently two charges being pressed against the suspect, both related to use of a facsimile weapon of mass destruction. Haley reiterated the fact that no additional hazardous materials were found on the campus, and at no time was there believed to be a bomb on the school campus.

Haley said that even with 25 plus years on the force, “this is the most complex case I’ve seen.” He said that he was very proud of all of the officers who worked on the case in a timely and efficient manner, and praised the school and all involved for their swift and effective response to the evacuation of the school.

– Earlier today, the Atascadero Police Department, Federal Bureau of Investigations, San Luis Obispo County District Attorney’s Office and San Luis Obispo Sheriff’s Department participated jointly in the service of search warrants related to the Sept. 11 incident at San Gabriel School in Atascadero, according to a report from the school.

On the morning of Sept. 11 at approximately 7:45 a.m., police received a report of a crime committed at San Gabriel Elementary. It appears that on the night of Sept. 10 or the early morning of Sept. 11 there were chains and padlocks placed on the exterior gates of the campus by an unknown suspect, as well as threatening letters placed outside of each classroom. A suspicious object full of liquid was also found on the playground.

The Atascadero Police Department, Federal Bureau of Investigations and San Luis Obispo County District Attorney’s Office will hold a press briefing today at 3 p.m. at the Atascadero Police Department, located at 5505 El Camino Real, to answer questions related to the investigation and provide further details about this case. Updates will be posted.