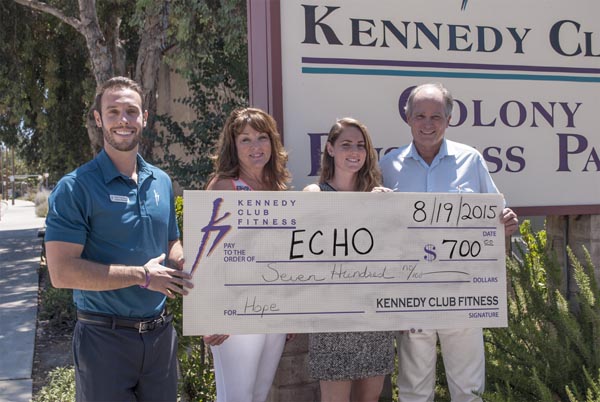 – Kennedy Club Fitness Atascadero recently donated $700 to local homeless shelter ECHO, El Camino Homeless Organization. The donation benefits ECHO’s Long Walk Home annual fundraiser. During the month of July, Kennedy Club Fitness hosted their annual Community Open House and participants had an opportunity to purchase raffle tickets for prizes. There was also a water tank that attendees paid to dunk their favorite Kennedy Club Fitness staff members, which included owner, Kevin Kennedy and son, Atascadero General Manager Sean Kennedy. “Our awesome raffle prizes were definitely a huge hit but I know people got a real guilty pleasure out of dunking the staff members. I think I was up there for about an hour,” said Sean.

The donation was offered to ECHO’s Long Walk Home fundraiser which takes place on Saturday, Aug. 29, at the homeless shelter in Atascadero. Sean Kennedy chose ECHO as a recipient because of the critical services offered by the homeless shelter. “This is my hometown. It’s where I was born, raised and still live today,” said Kennedy. “ ECHO serves those in our local community with hot meals and shelter, and our members were motivated to donate to that cause, as am I.”

The fourth annual “Long Walk Home” fundraiser takes place on Aug.29, 2015, 9:30 – 11:30 a.m. at the shelter located at 6370 Atascadero Mall, Atascadero. Registration begins at 8:30 a.m. The event is supported by North County service groups, faith-based organizations, businesses and the public. “This is a critical fundraiser for ECHO,” said ECHO Board President Jim Patterson. “ECHO serves all of North County and we’ve grown over the last few years to increase support for the homeless.” The organization recently added 19 beds and created four family rooms. In June the organization sheltered nine families with a total of 15 children. “With everyone’s help, our goal is to raise $40,000 this year,” said fundraising volunteer Robin Smith. “More than two-thirds of ECHO’s operational budget comes from donations. We are a grassroots organization and we simply need the community’s help to continue providing shelter, meals and case management services to North County’s homeless. Everyone at ECHO thanks Kennedy Club Fitness for their support.”

“Long Walk Home” is $30 for adults, and children under 18 are free. Registration and donation collection forms can be downloaded at www.echoshelter.net. To donate or learn more about ECHO, El Camino Homeless Organization, go to www.echoshelter.net or call (805) 462-3663.