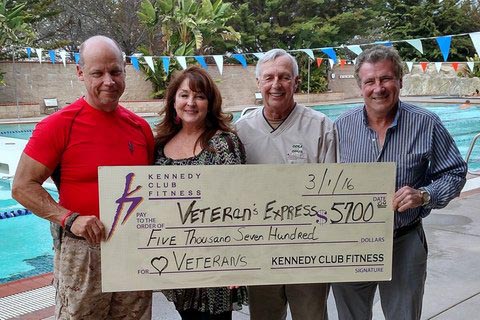 Service transports up to 180 local veterans to appointments and services

–During a recent Kennedy Club Fitness membership drive and silent auction, the company was able to raise $5,700 to benefit SLO County’s Veteran’s Express.

The Veteran’s Express is operated by Ride On and transports up to 180 local veterans to appointments and services. Brett Weaver, general manager and Kat Swank, local veteran and instructor at KCF-San Luis Obispo, organized the silent auction. Kevin Kennedy, owner of Kennedy Club Fitness authorized the membership drive. “This is the second year in a row we’ve held this fundraising effort to benefit Veteran’s Express,” says Kennedy. “This year, with the help of the silent auction we were able to more than double our contribution, and that’s a testimony to the organizers, members and our media sponsors.”