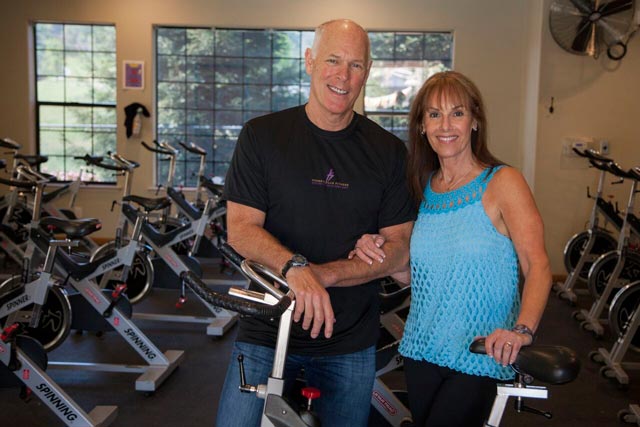 For eleven years now, Kennedy Club Fitness has set aside the month of May as the Annual Get Active SLO County Event.

Kevin and Barb Kennedy, owners of Kennedy Club Fitness, have had a long-standing commitment to help San Luis Obispo County become one of the healthiest places in the world.

Says Barb Kennedy, “We love to see people change their lives by becoming more healthy and fit and it is so rewarding to play a part in that, from children up through our seasoned population. In May, we welcome local guests to try their neighborhood club. Our hope is that with so much variety, they will find something they really like to do, which will help them embrace a more active lifestyle.”

Kevin Kennedy adds, “We recently made a sizeable investment in new equipment and new programs that we think will help people become more motivated.” One of those programs is MyZone, a heart-rate monitoring belt that tracks member’s efforts in real-time and rewards them for those efforts.

Says Kevin Kennedy, ‘Selling someone a membership, whether they pay $10 or $100 per month doesn’t do them any good if they’re not motivated to use it. MyZone helps you set achievable goals and holds you accountable to them, by giving you immediate feedback on how you’re doing. It’s been proven to increase club visits from four per month to almost twelve per month, and that means your body is changing in the right direction.”

Another new tool the four Kennedy Club Fitness locations have added is the ‘ InBody’ Body Composition Analyzer, a non-invasive, non-intimidating unit that accurately and privately measures body fat, lean muscle mass, and water in all segments of the body, along with identifying and tracking inflammation, swelling and even injuries. During the month of May, Kennedy Club Fitness is offering a complimentary InBody session with a personal trainer as part of the Get Active SLO County event.

Saturday, May 20th, both Kennedy Club Fitness San Luis Obispo and Atascadero are hosting Splash into Summer, a free family swim for local families and an opportunity to sign up for upcoming summer camps and programs for youth and adults. A BBQ will also be held as a fundraiser Charley Stafford, the daughter of Alyx Truax Stafford, Aquatic Director at Kennedy Paso Robles. Charley was severely injured in a tractor mower accident in March and the BBQ fundraiser is one of many events being held to offset medical costs.