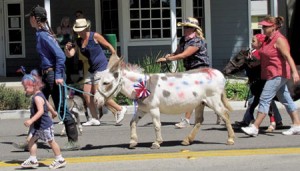 On Wednesday, the Templeton Kiwanis Club announced that this year’s theme for the 2015 Templeton Independence Day parade will be “Old Glory – Long May It Wave” and the grand marshall honorees will be our “Wounded Veterans – Salute Their Service.”

The Parade is the Kiwanis Club of Templeton’s annual gift to the community – they do everything from the initial planning through final execution.

And the Fourth of July will be here before you know it! It’s time to consider participating in the Parade, and begin planning / designing your entries, floats and music around the theme and Grand Marshall honorees.

Entry forms have either been emailed or mailed out to previous participants and additional forms are available for pick up at the Templeton Community Services District (TCSD) office, located at the corner of Fifth and Crocker streets, (805) 434-4900, or the Templeton Chamber of Commerce office, located at 321 S. Main St. (805) 434-1789. TCSD and the chamber will also email the entry forms upon request.