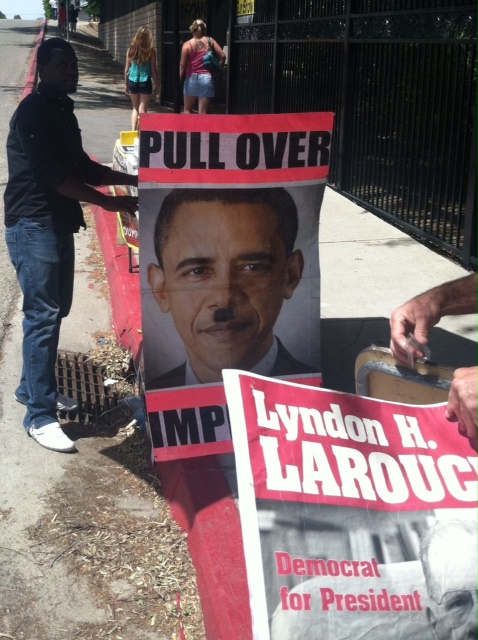 Supporters of US political figure Lyndon LaRouche passed out literature Saturday outside the gun show at the Paso Robles Events Center. Their campaign posters included signs asking for the impeachment of President Obama. Pictures of Obama included a small, Hitler-like moustache.

The LaRouche Campaign uses the same shocking posters at information booths around the country. For 30 years, the LaRouche Movement has promoted economic and political ideas in the U.S., Canada, Sweden, Denmark, Germany, France and Australia. The movement started among far left activists, but as the mainstream left evolved more extreme, LaRouche became isolated.

LaRouche is now 91-years-old. In 1988, LaRouche and 25 associates were convicted on fraud charges related to fund-raising. The LaRouche movement called the prosecutions “politically motivated.”

The LaRouche Movement advocates establishing a human colony on Mars. The intent is to diversify humanity’s environment. LaRouche ran for president as a Democrat in each election from 1976 to 2004.