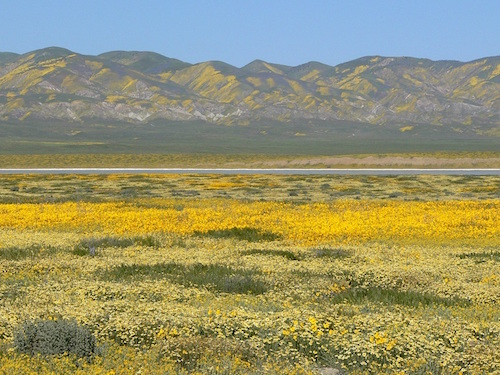 The Carrizo Plains during a “super bloom” event.

–Conservation groups in California sued the Trump administration on Tuesday to reverse its approval of what would be the first new oil well and pipeline in Carrizo Plain National Monument since it was established in 2001.

The legal action also seeks to resolve the fate of other long-dormant wells and associated facilities that the Bureau of Land Management identified for possible removal in 2013.

“It’s appalling that it takes a lawsuit to protect our spectacular national monuments, but we’ll do whatever’s necessary,” said Ileene Anderson, a senior scientist at the Center for Biological Diversity. “The Trump administration has flouted the law to appease polluting industries, decimate public lands and worsen the climate crisis. Thankfully this disastrous fracking frenzy is almost over.”

The bureau originally approved the well and pipeline in 2018 but withdrew that approval last year after Los Padres ForestWatch and the Center for Biological Diversity filed objections. The conservation groups cited the well’s potential harm to wildlife, views, and the climate.

In May the bureau re-approved the project, continuing to “disregard significant environmental harms.” The proposed fossil fuel extraction would harm threatened and endangered wildlife, mar scenic views and violate several laws, including the Endangered Species Act and National Environmental Policy Act, as well as the monument’s resource-management plan, the Center for Biological Diversity claimed in a statement.

The BLM disagreed in May 2020, saying, “The BLM has taken a closer look at this proposed oil well to be located on an existing wellpad on a valid federal lease within the Russell Ranch Oil Field. The BLM has conducted further consultation with the U.S. Fish and Wildlife Service regarding potential impacts to threatened and endangered species and evaluated the environmental effects of greenhouse gas emissions on climate. Our analysis shows that this new well poses no undue health or safety concerns, has no significant impacts to the environment and is consistent with management directives for the Carrizo Plain National Monument.”

The proposed well site is located at the base of the Caliente Mountains, inside the western boundary of Carrizo Plain National Monument. The area is home to several protected species, including threatened San Joaquin antelope squirrels, endangered San Joaquin kit foxes, and an endangered flowering plant called the Kern mallow.

“Today’s lawsuit asks the bureau to do what its own management plan requires it to do: Phase out oil drilling in the Carrizo Plain National Monument and clean up the mess that has been left behind,” said ForestWatch executive director Jeff Kuyper. “More wells and pipelines will send this precious landscape — and our planet — in the wrong direction.”

The well would be drilled on a pad that hasn’t produced oil since the 1950s. In 2016 the Bureau agreed to the oil company’s request to abandon the old well, pipelines, and other equipment at the site. The company, E&B Natural Resources, was supposed to restore the area to its natural condition, including recontouring and reseeding. The work was never done.

The bureau’s approval of new development backtracks on plans to restore the land. The monument’s management plan calls for phasing out oil drilling in the national monument, including promptly capping and remediating old wells and facilities that have not produced oil in decades. Some of the oil wells in Carrizo Plain National Monument have sat dormant since the 1950s, potentially emitting greenhouse gasses, leaving a blight on the landscape and posing a risk to underground water supplies.

The groups’ lawsuit calls for a plan to properly abandon and reclaim old well sites owned by Bakersfield-based company E&B Natural Resources. In 2013 the bureau and the oil company began evaluating 12 idle wells in the Carrizo Plain to determine whether they should be permanently plugged and the surrounding land restored to natural conditions. Seven years later only one of the wells has been addressed.

This lawsuit centers on the Russell Ranch Oil Field, which covers approximately 1,500 acres of the Carrizo Plain National Monument and adjacent private land. In 2018 the field produced only 128 barrels of oil per day ― 0.03-percent of the state’s total oil production and one of the lowest-producing oilfields in the state. The field is reportedly nearing the end of its useful life.

The lawsuit was filed in U.S. District Court in Los Angeles. The groups are represented by the Center for Biological Diversity and the Stanford Environmental Law Clinic.

Editor’s note: This article has been updated to include attribution of statements to the Center for Biological Diversity, and include a May 2020 statement from the BLM.