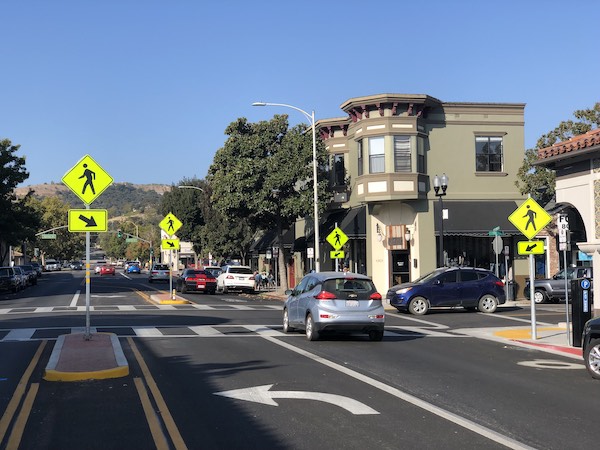 Letter to the Paso Robles City Council and city staff

On the neighborhood website titled Nextdoor, a posting was created on Sept. 23 titled “Ugly Yellow Downtown Signs.” This post was in reference to the new signs and flashing lights through the 13th street corridor.

To date, there have been 240+ comments on this post regarding some thoughts, feelings and alternative ideas from the citizens of Paso Robles.

Due to that response, a Poll was created to get the opinions of our citizens of how they felt about the function and aesthetics of the newly designed 13th street corridor. https://nextdoor.com/news_feed/?post=127348017

Poll Question: What do you think about the look and functionality of the 13th street corridor?

(A) I think the design and functionality of the “Ugly Yellow Downtown Signs”, medians and crosswalks on 13th street are not vehicle friendly or people-friendly.
I believe they are dangerous, confusing, and all wrong for that already-narrow street. I would like to see the area re-designed. I would like the city to welcome public input into a new design. I would like to see a design more in keeping with the aesthetics of our quaint downtown.
Agree: 79%

(B) I think the design and functionality of the “Ugly Yellow Downtown Signs,” medians and crosswalks on 13th street are acceptable and should be left as they are.
Agree: 20%

We believe, that more important than the percentage of people who voted one way or another, is the “why” of those votes. There are serious design flaws that now make the 13th street corridor confusing, clumsy and oftentimes unsafe for both drivers and pedestrians.

As you can imagine, the comments are all over the board. But the vast majority is about the lack of maneuverability and the lack of vision through what is now a cluttered street.

Comments from 13th street business owners range from “It’s a driving disaster” to “It’s just another nail in the coffin of our charming small town.”

This design came from the desk of an engineer. Engineers think with a technical brain, not a practical brain. With a little more effort, we could have a design that works both ways.

One personal note, when the plans were in the works for the Sherwood Road Improvements, the City Council, Public Works Director Dick McKinley, Capital Projects Engineer Ditas Esperanza et al, stood on the Sherwood Road sidewalk talking about how they wanted the road to be 2 lanes only with medians and trees down the center. We were opposed to that idea as we were aware of the impending traffic from the new housing developments and feared that having only 2 lanes would be a traffic nightmare. It was here that Ditas Esperanza made the statement that if the medians posed a problem, they would take them out!

We ask that the city make note of, and take action on the wishes of its citizens and business owners, and redesign the 13th street area to be less flashy/distracting, less cumbersome and safer for all. If it means taking out the medians, so be it.

From the “Goal Setting Workshop” in 2018, it was determined by the city that, “The purpose of City Council Goals is to ensure that the community develops and evolves in ways that match citizen desires and interests”. We ask you to honor those goals.