Discussion will continue at June 9 meeting 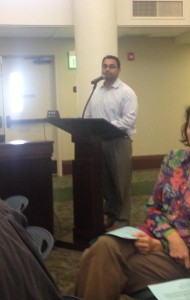 A seven-page letter from an attorney representing Champions Health and Racquet Club owner Hank Minardo was submitted to Atascadero city staff just hours before the council meeting Tuesday, setting in motion a series of questions and concerns that resulted in the public hearing being removed and continued to the Tuesday, June 9 meeting.

The discussion concerned a gym project by Fitness Evolution proposed for the former Spencer’s Market site at 8665 El Camino Real. Though a Conditional Use Permit was unanimously supported at the April 21 city planning commission meeting, public outcry followed that appears to have been generated by two local gym owners, Minardo and Josh Donovan of Give Fitness.

Minardo is appealing the CUP, stating in his letter, submitted by his attorney, Babak Naficy, “The appeal should be sustained also because the city has failed to adequately analyze the project’s consistency with the general plan and has failed to consider whether the site is appropriate for a fitness center. The retail commercial district in which the project would be located was not intended to accommodate a health club; it was intended to support a supermarket or other retail store that would serve the needs of the community.”

Fitness Evolution CEO Sanjiv Chopra was at the meeting and said he is being unfairly targeted, partly because his company did not purchase Minardo’s gym. Chopra submitted documents to the council that included a series of emails in what appear to be talks concerning Minardo’s business for sale. The project has gotten the attention of local residents.

Goode said she opposed the Fitness Evolution project because the gym would not be a good neighbor to other shopping-mall residents. Clay also opposed the project.

Donovan posted a blog on May 21 asking Atascadero residents to join him in opposing the project. “Fitness Evolution is a large company that has been growing rather quickly,” Donovan wrote. “They currently have over 40 gym locations in California and are in six other states. In our industry, this kind of pattern typically means that the owner is looking to grow as fast as possible in order to sell the company. With that focus in mind, there is usually very little care given to facilities or members. We find this to be a glaring issue with Fitness Evolution. Not only do they have a poor reputation among other industry professionals, but also with current and previous members as well as employees. They have a rating of F with the Better Business Bureau, citing over 260 customer complaints.”
Donovan was present at Tuesday’s city council meeting and said in an interview following the meeting that he will see the issue through by returning for the June 9 meeting. “I hope the city will do the right thing,” he said.

Before Minardo’s letter was submitted, city staff had gone on record recommending that city council members deny Minardo’s appeal and uphold the planning commission’s approval of Fitness Evolution’s the CUP.

The June 9 city council meeting will begin at 6 p.m. in city council chambers located on the fourth floor of the Rotunda Building, located at 6500 Palma Ave.