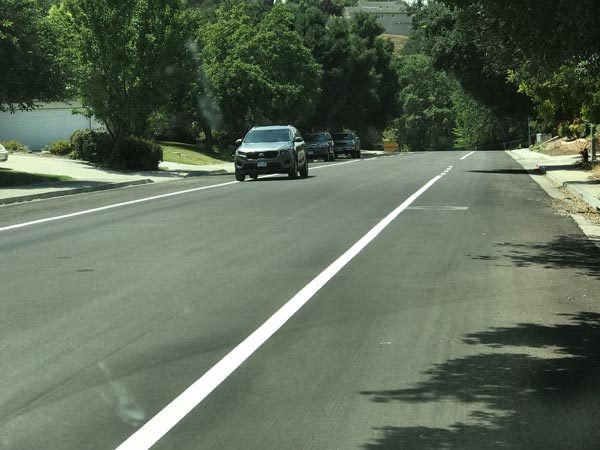 The following is the content of a message I sent to Paso Robles Mayor Steve Martin and Councilman Fred Strong. It deals with the city preparing to paint bike lanes on Montebello Oaks and I’m sure, other residential streets in the city. I have since had time to calm down and “reword” the message. However, my concerns still remain for the following reasons. You will see, I hope, that safety is the greatest reason, followed by parking issues, and home values.

In an effort to prevent yet another fiasco on Montebello Oaks and another annoyance to residents. I saw painters this morning on my street and asked what they were doing (the street – and others had just been resurfaced and looked great!). In addition to painting stop legends and speed legends (which are OK), I asked them what else is happening. They said they were going to install bike lanes.

I erupted saying that is one of the worse things public works in this city has done. The worker who was preparing to do the painting agreed with me in that the idea was stupid. There have never been painted bike lanes on any of these residential streets in my area and they are not needed.

In my complaint to the city’s public works director, I was informed that Montebello Oaks was completed before the Master Plan of Bike Lanes was established. But, for some reason, a new Master Plan was adopted that called for bike lanes on Montebello Oaks.

The installation of bike lanes in an inappropriate manner seems to be a pattern in this city. Not long ago, the city put up signs along the entire length of Rolling Hills between Golden Hills and Creston. In that case, at least 15 signs were installed telling bicyclists that they could use the entire street as a bike lane. I saw that on my way to the gym and had a great problem with it.

I was a traffic safety engineer for 30 some years as well as an expert witness in traffic engineering. I complained to the city, as did other residents from what I heard, that doing such to Rolling Hills is creating a major safety hazard. The city was allowing bikes moving at say 20-25 mph to legally use the same lane as cars/trucks moving at 40-50 mph. Thankfully, all the signs and striping on Rolling Hills relating to bikes was removed.

Here, and in many other residential streets in Paso Robles, I’m asking/pointing out the same thing. I’m hoping the city will see the same issue of safety – not to mention the value of our houses going down as well as parking issues for residences (is it not illegal to park in a bike lane?).

Montebello Oaks is 43’7″ wide. Each of the bike lanes to be painted is measured to be 12 feet. That leaves only 20 feet for drivers to travel legally up and down the street. That is 10 feet of travel way on each side. Ten feet is the width of a typical alley. Can you not see the danger in that? I just pray to heaven the City has no plan to put a double yellow stripe down the street as well.

I have been here six years. While I have not yet camped out on the street to count bike traffic, one can bet that the level of bike traffic is very very low. To put in designated/painted bike lanes for essentially no reason is ludicrous – given the questionable benefit that bike lanes provide (ask a bike rider for information in that regard) as compared to the heartburn such a move will give to the residents.

I am asking you to put a stop to the bike lane painting effort. I called the public works director with my complaint. His response was “I’ll look into it”. He later informed me that the issue of bike lanes in the city was as of now, being reviewed. I intend to let all the neighbors know (again as we have been forced to do before) and if the bike lanes get painted, we’ll do the petition thing demanding they be removed. Given the fact that the streets were just repaved, the resulting ugly sandblast scars on each side of the road will not bode well for the city’s operational ability and use of money. A bike lane on these residential streets is ridiculous.

Please, now that you are reviewing the bike lane master plan, please put a stop to this nonsense and remove painted residential bike lanes from the Master Plan. I might add that no residents were informed that the bike lane string was to occur.

The mayor visited the locations personally – informing me that “the bike lanes do look wide to me”. He asked if I preferred that he ask the Council to cease all striping pending review of the bike master plan. Of course, I said yes. Stop everything! The only problem is that the striping has now been completed!! What we want to do now is REMOVE the striping.

If you wish to join the removal effort, contact the Paso Robles City Council via eamil at Council@prcity.com. If you wish to complain to the Planning Commission as well, their email is planningcommission@prcity.com.