In honor of National Library Week, which runs April 12 through 18, “marshmallow madness,” will strike the Paso Robles City Library once again as children, teens and adults are invited to create and display dioramas featuring the marshmallow goodies during the library’s second annual Peeps Diorama Contest. 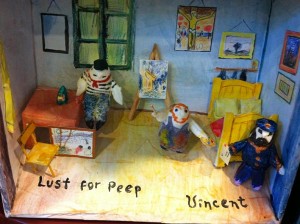 An entry from last year’s contest.

“If you like to play with your food, this is the contest for you!” Children’s Services Librarian Heather Stephenson stated.

The Easter confections must be the stars of a shoe box scene depicting a favorite book or work of art. Stephenson encourages participants to, “break out your crafting supplies and of course those sticky chicks and bunnies and let your imagination run wild!”

Entries will be accepted beginning Monday, March 23 and dioramas will be on display through Thursday, April 30. All entries are due to the library by Saturday, April 4 by 5 p.m. Patrons are invited to visit the library April 6 through April 18 to cast votes for their favorites. Winners will be decided by popular vote and will be announced Wednesday, April 22.

Official rules of the contest

• One entry per person or group.
• You must use a shoe or boot box.
• At least one Peep must be used in the scene (but the more you use, the better!) All figures in the diorama must be Peeps, or made of Peeps.
• The title of the book or work of art should be displayed somewhere on the box. Your name, age and contact information should be placed on the bottom of the box.
• This contest is open to everyone! Categories include: Family (all ages have fun crafting together), Children (12 and under), Teens (ages 13-17), and Adults (18 and older).
• The dioramas must be brought to the Library between Monday, March 23 and Saturday, April 4 at 5 p.m. They will be on display until April 30. Entries not claimed by April 30 will be eaten.
• Voting will take place in the Library April 6-April 18. Winners in each category will be decided by popular vote.

“Join us in celebrating this season of marshmallow glory and wonderful books and art too!” Stephenson said. For additional details or questions visit www.prcity.com/library or contact the Paso Robles City Library at (805) 237-3870.