Paso Robles News|Tuesday, March 31, 2020
You are here: Home » Top Stories » Lift your spirits at Via Vega’s Day of the Dead celebration 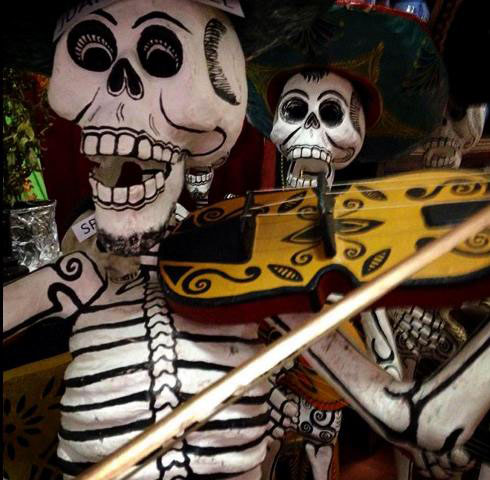 Locals and visitors celebrate the memories of loved ones

Ornately decorated altars filled with candles, photos and mementos of loved ones who have passed on is a tradition associated with Dia de Los Muertos, (Day of the Dead) that has roots in ancient Aztec, Mayan and Toltec cultures. Via Vega Vineyard and Winery honors this tradition by setting up an “altares de muertos” to be visited by the public during the month of October, followed by the Dia de Los Muertos celebration on All Souls Day.

Via Vega has been honoring the tradition since 2007 when the Vega family first set up an 8-foot community altar in the winery’s tasting room. Over the years the altar has grown to its present size of 24 feet, as more and more people show up to leave gifts and mementos or light candles in honor of friends, family and animal companions who have passed on. Altars are traditionally known as altares de Muertos, or ofrendas, are the most prominent feature in the celebration because they guide the souls back home.

For 2019, the community altar is on display from Oct 4 – Nov 3, and the Dia de Los Muertos Fiesta is on Sat Nov 2. Additional events, such as sugar skull crafting classes will to be announced on their website.

The sugar skulls, or Calaveras, associated with Dia de Los Muertos, were originally edible or clay representations of the human skull. The edible Calaveras were made primarily from sugar, brightly decorated and either gifted to children or placed on the altar. A tradition recorded as far back as the fifteenth century, sugar skulls today are represented in jewelry, clothing designs, face painting and a variety of artistic and commercial items. 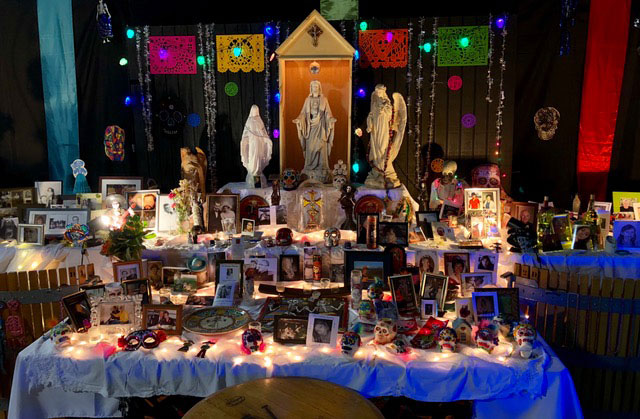 Although Dia de los Muertos has ancient Mesoamerican roots the arrival of the Spaniards brought the original celebrations under the influence of the Catholic Church. Eventually, the ancient celebrations merged with Catholic practices and the celebration began taking place on a day on the Catholic calendar – All Souls Day.

Celebrating the memories of the dead is not exclusive to Dia de los Muertos, most ancient cultures around the world had some kind of celebration during a time of year when the people believed the veil between the worlds thinned or lifted allowing the living and dead to walk and communicate between the two worlds. Some believe spirits from the dearly departed return to this realm to provide advice to loved ones.

The Mexican traditions of visiting gravesites, maintaining, and setting up altars of remembrance in homes and around the community is becoming more and more popular in North America because it is relevant for so many people. The day is not about mourning or sadness (or even fear). It’s about joy and remembrance and joining the living and dead in celebration. The weeks and days of preparations leading up to Dia de los Muertos and the fiesta are as important as the day. The small ceremonies and family traditions for creating the altar, the colorful decorations and costumes, and planning the food and festivities are all part of the ceremony honoring those who have gone before us. The ceremonies appeal to people who are connected in spiritual ways, and are pleased by the wide array of colorful décor and festivities that the holiday encompasses.

Fiesta tickets will be available in September. The fiesta features music, folkloric dancers, a feast with pan de muerto (bread of the dead) and of course, wine!

Bring your precious mementos to Via Vega Vineyard and Winery, pay your respects to the past, enjoy the present, and toast to the future.