Dorothy Mishalanie, 2, before her hair started to fall out due to chemotherapy after a tumor was discovered in her left kidney and heart.

Shannon McDonald, whose fiancé, Mark Mishalanie Jr., owns Black Stallion Restaurant in Paso Robles, started a GoFundMe campaign to raise $40,000 to help with medical expenses while her 2-year-old daughter, Dorothy Mishalanie, fights a tumor encompassing her left kidney and two-thirds of her heart. 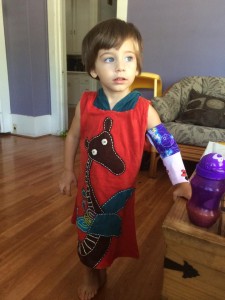 Dorothy Mishalanie after she gets her hair cut due to her thick hair falling out. Her dad, Mark Mishalanie, got his head shaved at the same time.

McDonald said Dorothy was a perfectly healthy little girl. Sure, she had her share of colds and other illnesses common among children. However, on Sunday, July 13, McDonald got a text from a friend who had been watching Dorothy. The text included a photo of Dorothy’s urine that was  bright red liquid. Her friend asked if Dorothy was playing a trick on her, if maybe the 2-year-old had put Koolaide in the toilet. McDonald immediately said that Dorothy wouldn’t do anything like that and it was most likely blood.

“At first I’m thinking it’s a terrible UTI,” McDonald said, but told her friend to take Dorothy to Sierra Vista Regional Medical Center and she’d meet them there.

After some testing, it came back that Dorothy did not have an infection, but it still wasn’t known what had caused the blood in her bowel movement. After an ultrasound, it was discovered that she had a nine centimeter mass in her left kidney, and expanding into her heart — taking up two-thirds of her heart to be exact. Dorothy was taken directly to Santa Barbara Children’s Hospital with both of her parents, McDonald and Mishalanie, following behind the ambulance.

More tests showed that the tumor was only in her left kidney and heart.

“That’s the only good news we’ve gotten — it wasn’t in the rest of her body,” McDonald said.

Because of her age and that two-thirds of her heart is occupied by a tumor, she has to have a PICC line in her left arm instead of a port. Her mom said that the picc line requires more care than a port and that Dorothy is apt to play with it because it’s in her arm, and she’s 2.

Dorothy Mishalanie and her mom, Shannon McDonald, during a visit to the hospital.

On Friday, July 18, Dorothy’s family found out that she has Stage 3 Wilms Tumor. Since then, two more tests were run to confirm the results. One of the tests — a DNA test — has not yet come back. McDonald said that if that test confirms Wilms without anything “weird,” they’ll be able to continue the treatment plan Dorothy is currently undergoing — which includes trips to Santa Barbara every Thursday for chemotherapy and blood work. Those trips to Santa Barbara could include overnight stays depending on how Dorothy is doing. Dorothy’s mom said that if the DNA results confirm that it’s Wilms, there’s an 85 percent chance that Dorothy will beat it and it won’t return. She said that the scariest thing is that the tumor is in Dorothy’s heart, which is a pretty rare occurrence.

“Best case is chemo will break up tumor and more it out of the heart and vena cava,” McDonald said, adding that no matter what, Dorothy will have her left kidney removed. “We’re just hoping that chemo will get it out of her heart. [Open heart] surgery will be really risky.”

If the chemo does not get the tumor out of her, Dorothy will undergo open heart surgery. 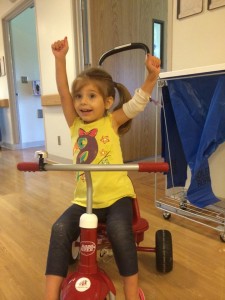 Dorothy Mishalanie during one visit to the hospital. Her picc line is under the bandage on her left arm.

“This is all crazy. I can’t believe this is happening,” McDonald said, adding that her dad died in February only six months after he was diagnosed with cancer. “We’re hoping for a miracle now.”

Dorothy’s long, thick hair recently started falling out, so she got a pixie haircut when her dad shaved his head. Now, McDonald said, she collects the hair that falls out for the “Hair Fairy,” and leaves the hair she collects in a plastic baggie under her pillow and wakes to gifts from the Hair Fairy.

“She is doing so amazing,” McDonald said. “I am just so impressed by her. She is the strongest little girl.”

Until she got sick, Dorothy was getting ready to start preschool as her mom got ready to go back to school for nursing. McDonald had worked as a caregiver until recently when she had to quit her job to care for Dorothy while she fights the tumor. Since Mishalanie started the Paso Robles restaurant only this past spring, he wears many hats — head chef, general manager and owner — and works in the restaurant every day from 8 a.m. to well after closing — which is between 9 and 11 p.m. depending on the day. McDonald started the GoFundMe campaign while Dorothy was in the hospital the first time at the suggestion of Mishalanie’s father, Mark Mishalanie Sr., to help with Dorothy’s medical expenses, part of which are covered by insurance, and the lost of work for McDonald.