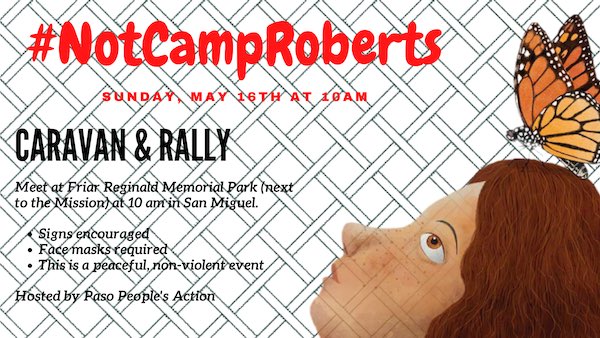 —Paso People’s Action, a civic progressive group located in Northern San Luis Obispo County, on Friday announced a non-violent protest at Camp Roberts this Sunday, May 16, in response to proposed actions by the US Federal Government to house between 5,000 to 20,000 separated migrant children at Camp Roberts.

Though no official announcement has been made on the arrival of the children, the recent sharing of job postings and ongoing community conversations which have excluded the voices of prominent community members has prompted concern, the group says.

“This proposed action affects everyone in North San Luis Obispo County, especially when children are involved,” said Yessenia Echevarria, co-founder of Paso People’s Action. “We do not want children at a military base and believe the priority should be reuniting them with their families.”

Those interested in participating in the peaceful protest can join Paso People’s Action at Friar Reginald Park, next to Mission San Miguel, at 10 a.m. in San Miguel this Sunday. Signs are encouraged and due to COVID-19 guidelines, masks are required, regardless of vaccination status, the group says.