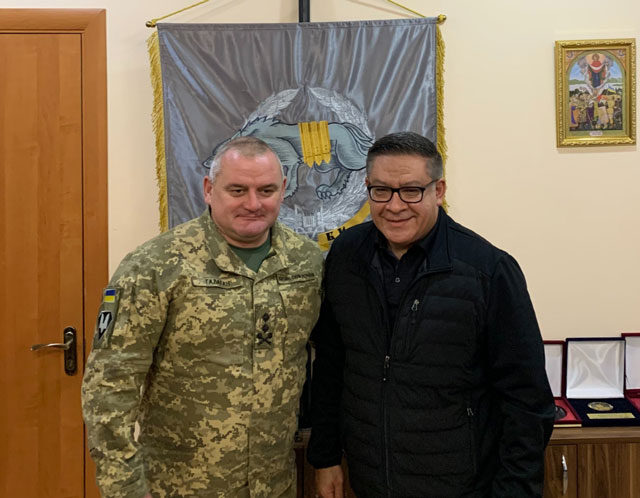 ‘I join President Biden, our NATO partners, and the entire free world in condemning this blatant act of aggression’

“Two months ago, I visited Ukraine with a bipartisan Congressional delegation and heard firsthand their growing concerns about Russia’s attempts to destabilize Ukraine’s democracy and divide the U.S. and its allies. Now, we have seen an unprovoked and illegal escalation of those efforts with Russia’s invasion of eastern regions of Ukraine.

“I join President Biden, our NATO partners, and the entire free world in condemning this blatant act of aggression and clear violation of international law.

“The Biden Administration and my colleagues and I in Congress will continue to maintain unwavering support for the Ukrainian people and their sovereignty by imposing crippling sanctions on Russian individuals and institutions who are responsible for this unprovoked invasion.

“The time for diplomacy is not over, but clear and painful consequences for Vladimir Putin are necessary to respond to this aggression. While I do not want to see American combat troops directly involved in this conflict, targeted sanctions and continued security assistance for Ukraine will enable the international community to send a clear message that Russia must reverse course and Ukraine must remain free to make its own decision and choose its own future.”

Rep. Salud Carbajal represents California’s 24th congressional district, encompassing Santa Barbara, San Luis Obispo, and part of Ventura County. He sits on the House Armed Services Committee, Agriculture Committee, and Transportation and Infrastructure Committee, where he serves as the Chair of the Subcommittee on Coast Guard and Maritime Transportation.