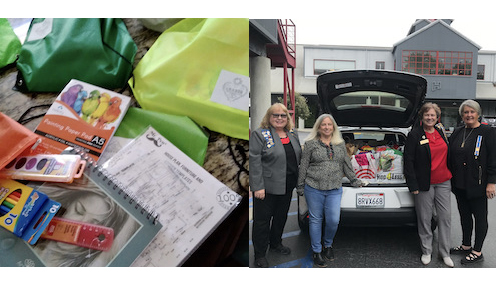 –The La Cuesta Chapter of the National Society of the Daughters of the American Revolution (NSDAR) recently had a large majority of its 88 members participate in a “HeART-felt” project for the Court Appointed Special advocates for Children, CASA program.

CASA of San Luis Obispo County advocates for the best interests of abused and neglected children within the court system. CASA recruits, trains, and supervises volunteers who advocate for this vulnerable population with the goal of ensuring that each and every child grows up in a safe, nurturing, and permanent home.

The project was led by the California State Society DAR Community Classroom Chairs. Recognizing a need to support the children that CASA serves, volunteers from all seven DAR chapters in District VII from the CSSDAR participated in the initiative.

District VII Director Robin Eiland, La Cuesta Chapter Regent Leslie Lechner along with La Cuesta chapter members Carrie Lovell, and Barbra Wright delivered the bags to a representative from the CASA office in San Luis Obispo. CASA Executive Director, Teresa Tardiff, said that the program’s current 130 kids were overjoyed and very thankful to receive the unexpected art kits. She said that the kids have been smiling again, especially after the year that they have had. 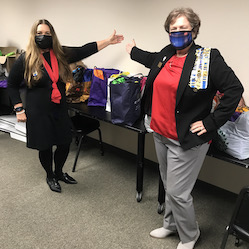 “I am so glad for our chapter members’ generous donations,” Regent Leslie Lechner said.

The National Society Daughters of the American Revolution (DAR) is a nonprofit, nonpolitical women’s service organization with more than one million members who have joined the organization since its founding in 1890. Any woman 18 years or older, regardless of race, religion, or ethnic background, who can prove lineal descent from a patriot of the American Revolution is eligible for membership. To learn more about the work of today’s DAR, visit www.DAR.org or connect with DAR on social media at facebook.com/TodaysDAR, twitter.com/TodaysDAR and youtube.com/TodaysDAR.