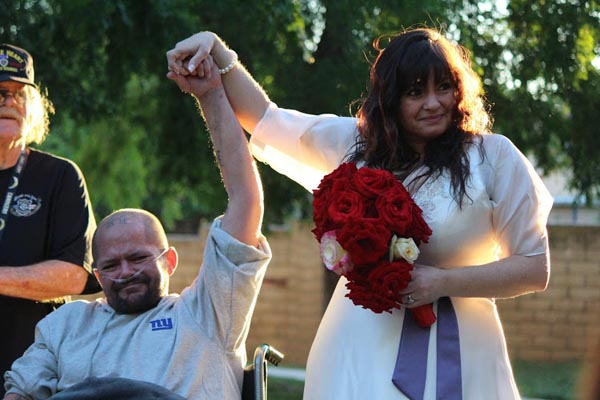 Couple married on Monday at their home in Paso Robles

–Monday afternoon, lifetime Paso Robles resident Chad Rice and his fiancé of several years Kimberly Gibson made their holy union official in front of beloved friends and family at their home in Paso Robles. Rice, 36, is currently home on hospice due to congestive heart failure and pulmonary arterial hypertension.

Last week, Rice was admitted to Twin Cities Hospital due to respiratory problems. After several tests and medical evaluations, it was determined that Chad was dealing with multiple organ failure that could not be reversed. Upon further inspection, doctors determined there was nothing further that could be done and made the decision to send him home on hospice for his own comfort.

Just a few days after arriving home on hospice, close friend Joe Pisciotta decided to arrange a wedding for Rice and his fiancé, Kim. In little under a day, Pisciotta managed to get ahold of a wedding dress, photographer, and arrange a guest list for Chad and Kim’s wedding. 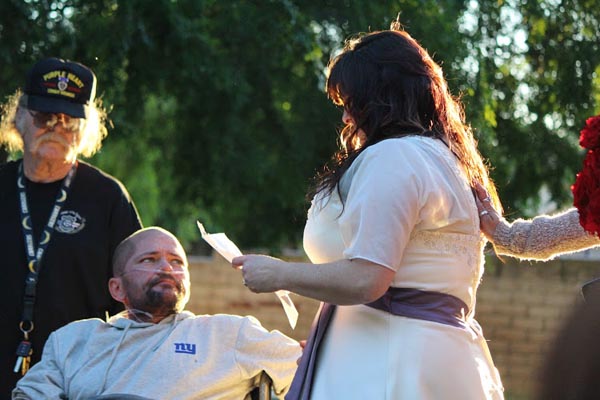 At approximately 6:30 p.m. Monday night, the ceremony began. Friends and family gathered in the courtyard of their Dry Creek apartment as Rice and fiancé Kimberly stood before them to make their union official. As they spoke their vows, tears began to fall among the crowd. With friend Pisciotta acting as the minister, the couple was finally officially and happily married.

Rice has been resident of Paso Robles since he was a child, living with mother and father Skip and Diane Rice. Rice has one older brother, Shane Rice, and one older sister, Katrina Rice-Smith, as well as a 13 year old daughter, Gabriella, who lives in New York.

Growing up, Rice attended Paso Robles High School and where he was a member of the youth football and cheerleading teams with longtime best friend Ricky Nevarez.

After graduation, Rice briefly moved to New York before returning to Paso Robles a few years later. It was at this time that he met Kimberly Gibson, and it was love at first sight. 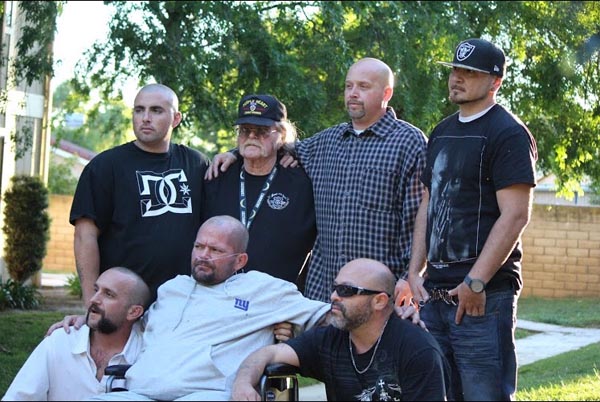 “Chunk [Chad] is my brother; my best friend.” said Nevarez, “He’s a legend in Paso. From tee ball to adulthood he’s been a world class best friend, brother, and husband. You can search the Earth for tens of thousands of years and never find another like Chad Rice.”

“Amongst his inner circle, Chad is known as the strong one.” said sister Katrina Rice-Smith, “He’s always been the glue that holds all his friends together.”

A Go Fund Me Page has been set up to help friends and family pay for medical expenses. A Meal Train, a service where meals can be donated to a person in need, has also been set up for him at https://www.mealtrain.com/trains/g0zwro!.