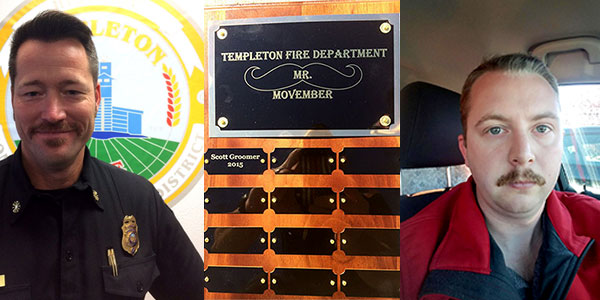 — November is a “no shave” month for some of the firemen and police officers in San Luis Obispo County, and it’s all for a great cause. Templeton Fire Chief Bill White has authorized the guys to let it grow for cancer research.

According to the charity web site, No-Shave November is “a month-long journey during which participants forgo shaving and grooming in order to evoke conversation and raise cancer awareness. Learn more about how you can get involved and start getting hairy!”

Fire Chief Bill White and fireman Andrew Neely are among those Templeton firefighters growing facial hair for charity and competing to be Mr. “Mowvember.” The 2016 facial-hair “winner” will have his name inscribed on the station’s Mowvember plaque. White says he’ll be chipping in his own donation to the American Cancer Society.