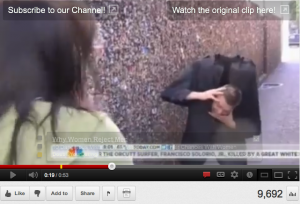 “Ferguson has been in a whirlwind of his own this week,” the chamber’s E-Insider reports. “After a Halloween Prank video that he filmed in mid-October in Bubble Gum Alley went viral– with just less than 4 million views as of today–  he was picked up by the Today Show and asked to come out for their special Halloween show. Unfortunately due to Hurricane Sandy the trip to New York City was cancelled, but instead the Tonight Show with Jay Leno asked him to appear. Check out Ferguson on Leno tonight at 11:30 p.m.”

He caught the attention of The Today Show with his head dropping stunt in Bubble Gum Alley in San Luis Obispo. Watch Rich “remove” his head for unsuspecting people on the street. Ferguson posted the video Oct. 19 and NBC picked up on it this week in time for Halloween.

Matt Lauer and Savannah Guthrie sure seem to love his clever scare prank. Ferguson is a North County native and Atascadero High School graduate. His YouTube video has over 3,000,000 views. Check out his website at http://www.TheIceBreaker.com for more about him and his magic acts.

Clip from the today show:
http://www.youtube.com/watch?v=jN6rEUcmLjg