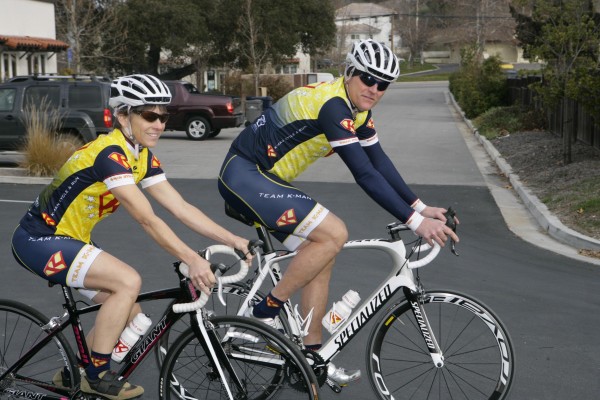 Keith Schmidt riding a bike with his wife.

The City of Atascadero’s Recreation Division announced that the California Park and Recreation Society’s (CPRS) District Eight selected K-Man Cycle & Run’s Keith Schmidt as Champion of the Community for 2014. The award will be presented to Schmidt at an annual awards & installation banquet in Santa Barbara in March.

In 2014, K-Man Cycle & Run sponsored not just one, but a number of youth basketball teams that were unable to acquire sponsors. Schmidt also donated over thirty gift certificates to Big 5 Sporting Goods for needy youth basketball participants so they would be able to purchase new basketball shoes. He is often volunteering his time to coach in the league, and also steps up to pay the registration fee for any player who may be struggling to pay.

The City of Atascadero’s Recreation Division and CPRS District Eight offer thanks to Schmidt for all of his support for our community youth sports programs.

The CPRS District Eight Awards and Installation Banquet takes place on Wednesday, March 25, in Santa Barbara. The event will honor District Eight agencies that were selected for awards in specific categories, and will also install new District Eight Board members for 2015, including the City of Atascadero’s Jennifer Fanning as board treasurer. CPRS’s District Eight includes agencies all over the Central Coast and beyond, from Paso Robles down to Ojai.