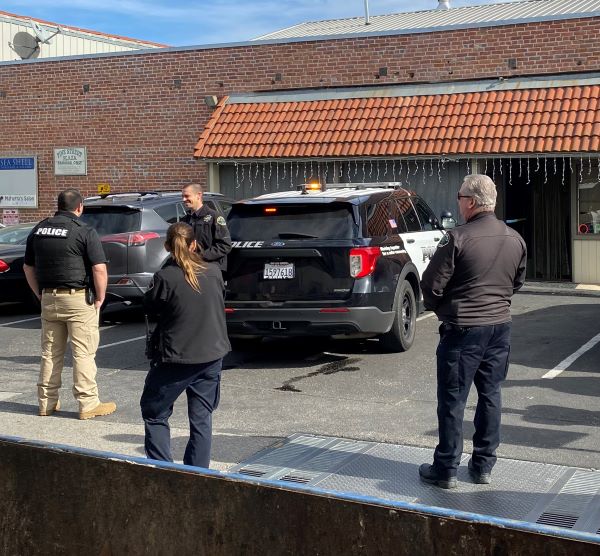 Police at a massage parlor on 13th Street in Paso Robles. Photo by Dick Mason.

– On Thursday at around 10 a.m., the Paso Robles Police Department, with the assistance of the District Attorney’s Counter Human Trafficking Team, executed search warrants on two massage parlors in the city of Paso Robles.

During the course of the investigation, it was learned through several sources and undercover operations that the massage parlors were offering sexual favors in exchange for money, police say. There was additional concern some of the involved employees might be victims of human trafficking.

The law enforcement team served the two search warrants and said they discovered significant evidence that each massage parlor was exchanging sexual favors for money.

There were no indications any of the involved employees were victims of human trafficking. While no arrests were made, each business is now under review for business license revocation, and massage certification revocation through the California Massage Therapy Council.

Further investigation will be conducted on evidence obtained in order to ascertain who was frequenting the establishments for potential solicitation of prostitution charges.

As this investigation is ongoing, the Paso Robles Police Department is requesting anyone with any information regarding this incident to call them immediately at (805) 237-6464.