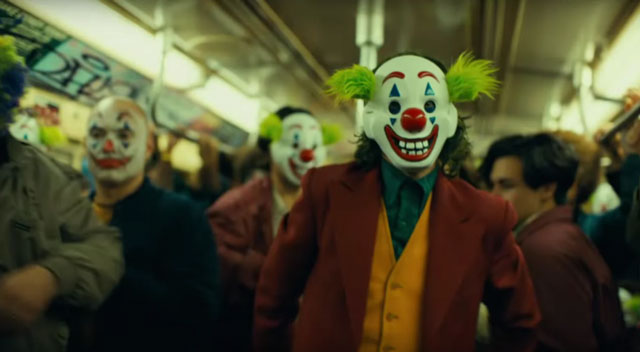 Local Army base Fort Hunter Liggett issued a warning to soldiers Thursday via Facebook to be “vigilant about their surroundings when entering theaters to see the movie screening of the Joker.” The new Joker movie by Warner Brothers opens in theaters today.

The warning was passed on by the base from the Department of Defense. It reads:

FBI warnings of Involuntary Celibate (Incel), an online community forum which is a term that refers to men who are “involuntarily celibate” and blame their situation on women as expressed online threat rhetoric. This is a warning by the US Army for DoD members about the possibility of mass shootings at screenings of the Warner Bros. film “Joker”, after the FBI identified threats from Incel extremists. DoD members are being warned to be vigilant about their surroundings when entering theaters. DOD personnel should identify all entrances and exits, check door security, and assess the theaters security measures prior to sitting down, identify two escape routes and run, hide and fight in a shooting situation. The FBI further assesses the idolization of past acts of violence by Incel in furtherance of their ideology likely for notoriety. The FBI made these assessments with medium confidence based on FBI reporting, open-source media, public reporting, and publically available information, including current and historical events. This email alert is a precautionary measure. FBI agents reportedly circulated the warning after it uncovered social media posts about the film by extremists classified as Incels. 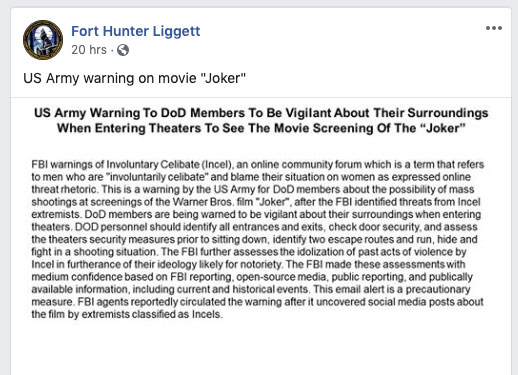 Incel is a term that was adopted in the ‘90s by an online subgroup of self-professed “involuntary celibate” men, according to news reports. Over time, some radicalized members of the incel community have formed an ideology that promotes violence. Elliot Rodger self-identified as an incel before he killed six people near the campus of the University of California, Santa Barbara in 2014. And James Holmes, the man who opened fire in a crowded movie theater in 2012 has become a bit of a hero to the incel community. It’s often been repeated that Holmes was inspired by the Joker, a claim that primarily rests on statements the killer reportedly made to police after the fact in which he said he “was the Joker.” Speaking with the Hollywood Reporter, Daniel Oates, Aurora’s chief of police at the time, said that “there is no evidence” the shooter ever said that.

The new 2019 movie Joker centers around an origin of the iconic arch nemesis and is an original, standalone story not seen before on the big screen, according to IMBD. Todd Phillips’ exploration of Arthur Fleck (Joaquin Phoenix), a man disregarded by society, is not only a gritty character study, but also a broader cautionary tale. 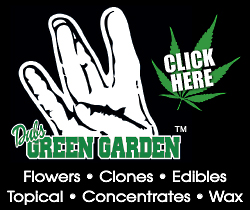